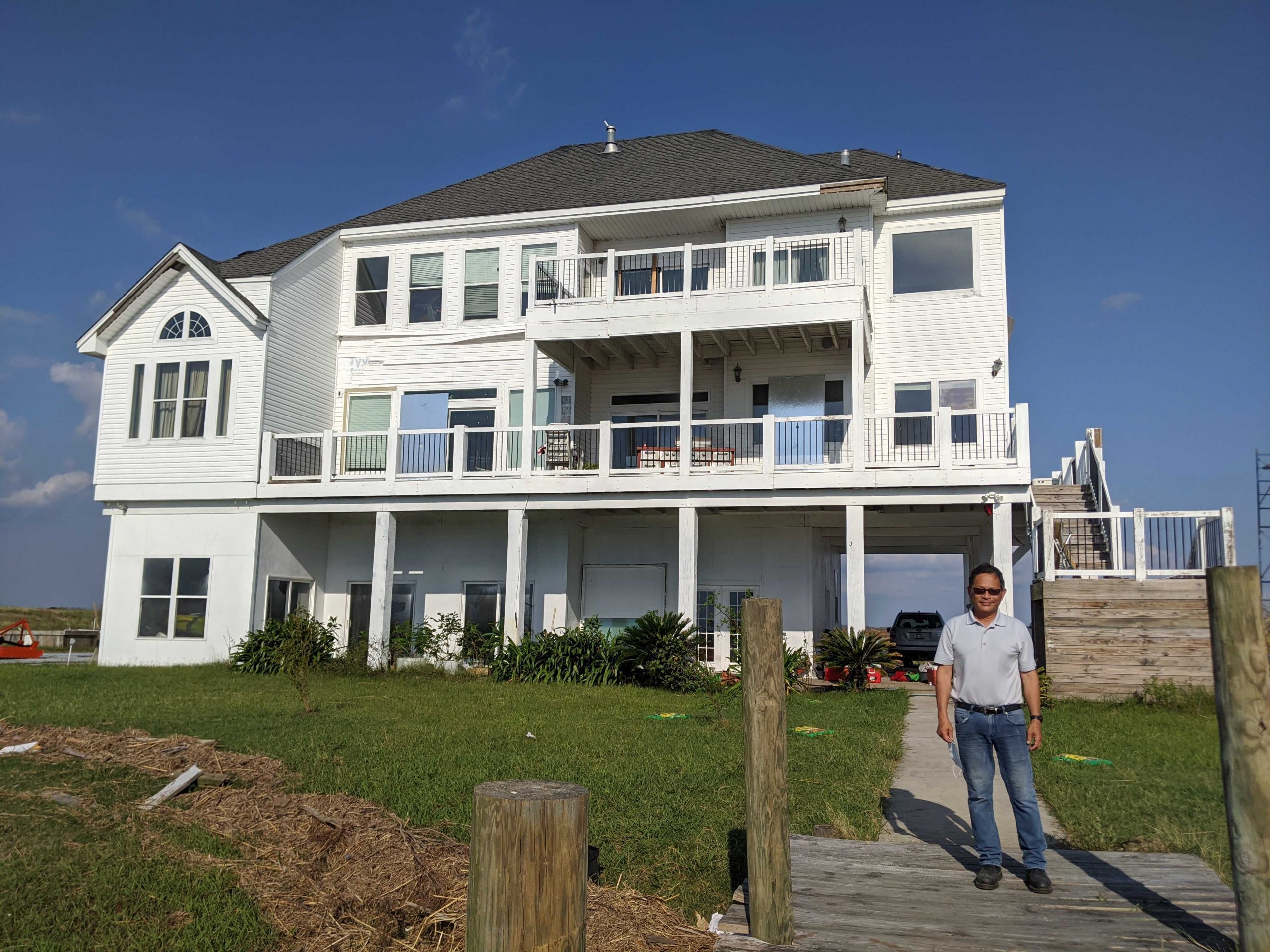 The following is a portion of a transcript from this podcast episode. Host Julie O’Donoghue talked to Duc-Hien Vu, a Cameron Parish resident who is trying to figure out if he should rebuild his home destroyed by Hurricane Laura.

Julie: After raising their kids in Lake Charles, the Vus started building their dream home on the [Calcasieu “Big”] Lake in 2005. Then, Hurricane Rita hit.

They weren’t living at Big Lake at the time. But the construction they had finished was wiped away. And Rita dropped three other homes on their land. Duc ended up hauling about 250 trailers worth of debris off his property by himself.

Still, they decided to rebuild– albeit with future hurricanes in mind.

The Vus house is 25 feet off the ground. It’s fortified. In fact, from the outside, it looks like it fared pretty well when Laura hit three weeks ago. There’s little visible damage — from the outside.

Vu: Actually, my initial reaction was ‘Oh. The house stands.’ We didn’t think the damage was that extensive until we got inside. And it wasn’t until two days later, that we really realized how bad it is. 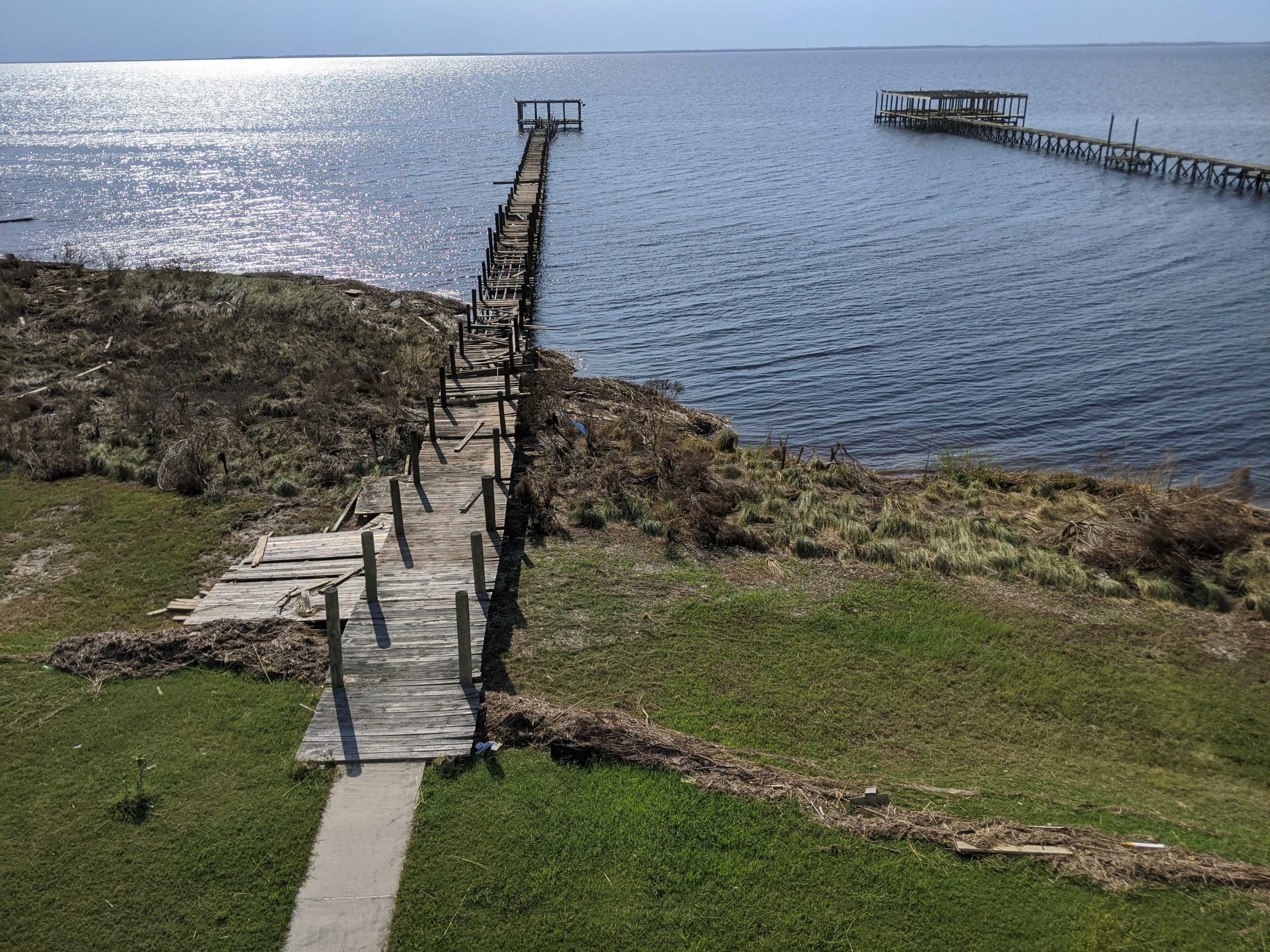 Simply because what happened with the water coming in, with the muddy water, it went through the wood floor, the sub floor and through the ceiling and insulation so it is soaked in everywhere. And three days later, the mold started to come out such as the green mold you see on the ceiling here. It’s that way to practically every room in the house. So that makes the house so where it’s really not livable.”

Julie: The Vu’s house didn’t flood. But the wind from Laura was so strong it blew out the doors and windows. That let water from the storm pour into the home. You can see swirls of mud on the floor rom where it was. Duc says the water means the house will have to be torn down.

Since Laura, Duc has been occasionally sleeping at the home of the local priest down the road that wasn’t badly damaged. But he and Cam-Thuy mostly stay at a family member’s home in Beaumont, Texas. They drive almost two hours each way daily to clean out the Big Lake house. Still, they don’t know if they will stay after all this.

Vu: I’m not so sure. Right now, I would say it’s 50/50. I mean, you know, we love the area so it’s likely that if we got enough of a settlement from the insurance we might rebuild. But if it’s poor, that we may not because both of us are of advanced age. We are only a few years — I would say five years at best — from retirement. So I mean a lot of our fight is taken out of us. So if it’s going to take three years to rebuild the house, what would that be for? You know two years from now, I’ll be retired.

Julie: If the house is rebuilt, it will look different than the one that’s here now.

Vu, an immigrant from Vietnam, moved to the United States in 1975. He has worked as a shrimper and an engineer. He has lived in the Lakes Charles area for almost 30 years. Currently, Vu is trying to figure out whether to rebuild his house after it was destroyed in Hurricane Laura.

Louisiana House GOP Move to Throw Out COVID Restrictions — For...

Gov. Edwards is sent a bill that creates a new way...