The pristine water source for Baton Rouge faces a serious and worsening threat — saltwater intrusion –that can be attributed to unchecked water use by the industrial sector. (Canva image)

This story was made possible with a grant from SEJ’s Fund for Environmental Journalism in partnership with Floodlight, an environmental collaboration, The Lens and the ​​Louisiana Illuminator.

Flowers seem to live longer in vases filled with Baton Rouge water, according to Dominique Rogers, 36, a florist in Louisiana’s capital city with 14 years of experience.

The city pulls its water deep underground from the Southern Hills Aquifer, which requires little to no treatment to drink, unlike other Louisiana communities such as New Orleans, which draws its water from the Mississippi River and requires heavy treatment.

But the pristine water source for the predominantly Black city of Baton Rouge is facing a serious and worsening threat from over pumping: saltwater intrusion. Much of it can be attributed to unchecked water use by the industrial sector, including by the oil and chemicals corporation Exxon, the toilet paper producer Georgia-Pacific and the power company Entergy.

Without intervention, the currently clean water source for more than 500,000 people in six parishes could become undrinkable for residents, according to a Louisiana Legislative Auditor report. It could also be detrimental to Rogers’ livelihood.

“I really do think it would affect a lot of floral business in Baton Rouge if that were to happen,” she said.

Across the globe, the industrial sector is the second largest freshwater user after agriculture. The processes of refining oil into gasoline, making petrochemical products and cooling power plants requires billions of gallons of water every day.

In Louisiana, industry uses more groundwater than in any other state except California, according to the U.S. Geological Survey. For decades industrial users have been able to pump water out of Baton Rouge’s aquifer effectively without limitations – no withdrawal caps on individual wells and no metering requirement, according to a 2019 report by the state Legislative Auditor. Some similar groundwater districts in Florida and Texas, in comparison, do restrict how much water can be withdrawn from individual wells.

“People ought to come first, not Exxon and Georgia-Pacific. We ought to save it for the people,” said Russel Honoré, a retired U.S. Army Lieutenant General who leads an environmental group called the GreenARMY, based in Baton Rouge.

In 2020 alone, Exxon’s chemical facility in north Baton Rouge used 7.3 billion gallons of water from the aquifer, enough to fill the Superdome stadium about eight times. The only company to use more was the Baton Rouge Water Co., which sells water to residential users.

“We need to protect the aquifer. But we need to do it in a constructive way,” said Brett Furr, an attorney for Baton Rouge Water Co. Exxon operates 70% of the company’s Baton Rouge refinery and chemical plant cooling towers on river water, according to the company. “ExxonMobil remains committed to the long-term conservation of the Southern Hills aquifer,” the company said in an emailed response to questions. 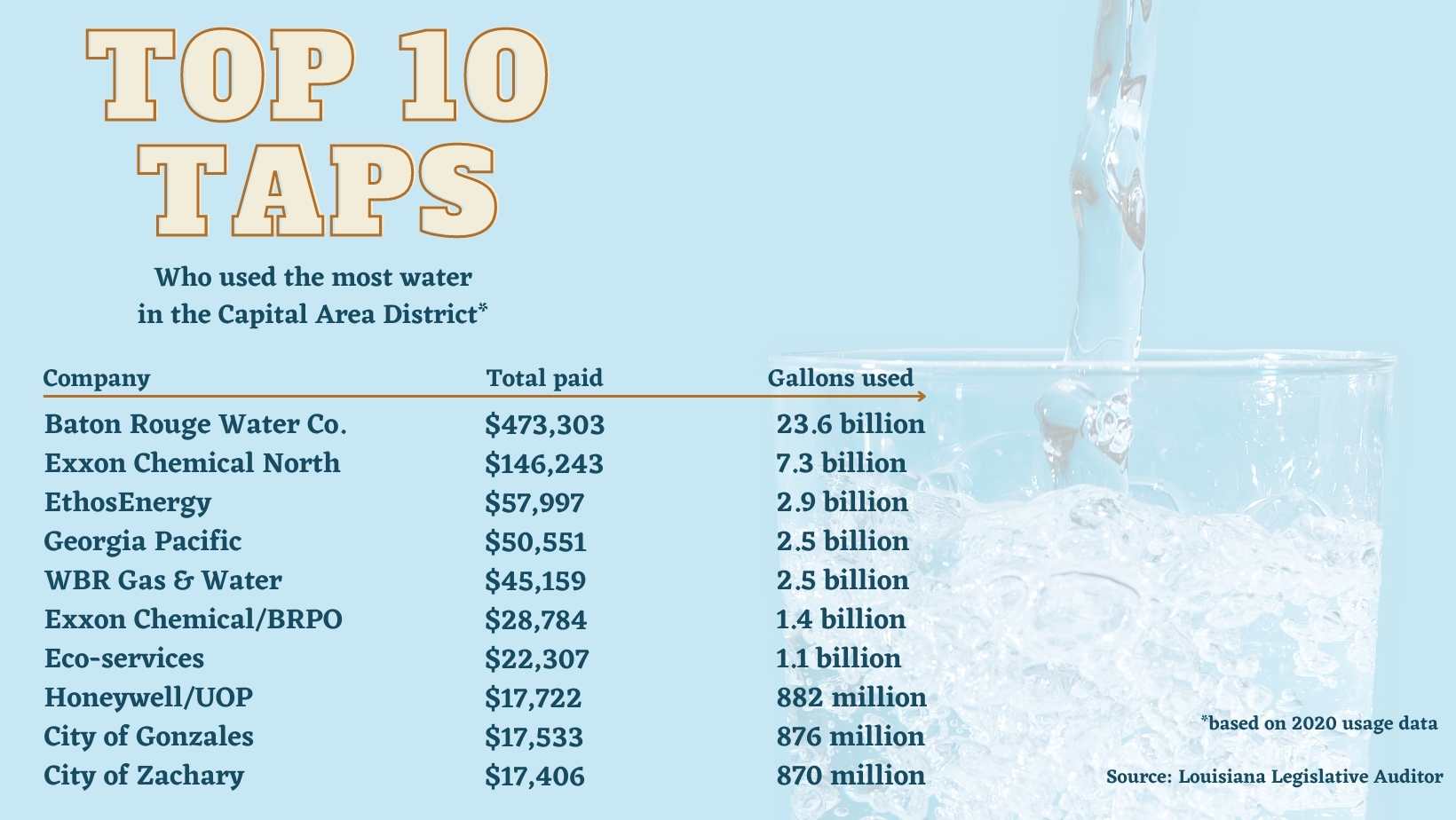 The threat of saltwater intrusion has been well known and documented for years, but those fighting more oversight and restrictions on industrial water use say they have met stiff resistance. A bill vetoed by the Louisiana governor last year would have made it legal for employees of Exxon and other companies to be members of the regulatory body overseeing water use in the Baton Rouge area. A similar bill introduced this legislative session passed the Louisiana Senate and House and was sent to the governor June 2.

Excessive pumping from the aquifer is pulling saltwater northward toward the clean source of drinking water. The salinity comes from salt domes, left behind by ancient oceans in the southern part of the aquifer.

In 2021, state lawmakers passed a symbolic, nonbinding House resolution urging and requesting the Louisiana Department of Natural Resources to limit the amount of groundwater that any industrial or commercial facility can draw from the aquifer to 5 million gallons per day by 2026. That would be a steep decrease from the 50 million gallons per day commercial and industrial facilities used on average in 2020.

But longer term measures have been harder to implement.

For most of its history, the Capital Area Groundwater Conservation Commission, which is tasked with managing the aquifer, was chaired by someone employed by one of the companies it regulates. From 1975 to 2004, 80% of commission chairs worked for ExxonMobil, Entergy, Georgia-Pacific or another large commercial or industrial water user, according to a report from the Louisiana Department of Natural Resources.

From 2013 to 2020, employees of regulated businesses held the chairmanship three times, and others served as committee chairs or vice-chairs. Commissioners are appointed by the governor and confirmed by the Louisiana Senate.

Need to get in touch?

Have a news tip?

Many trying to call attention to the threat of saltwater intrusion point to the leadership history as the reason why the commission has not limited the amount of water companies can withdraw from the aquifer.

Nobody speaks against Exxon in this town. They get what the hell they want

The conflicts were so apparent that in a rare instance, five water commissioners were hit with ethics charges in 2020 for working for companies the water commission regulates. But the charges were dropped this past February after their terms ran out or they resigned.

In what could be a major win for industry, lawmakers last year passed a bill that would make it legal for groundwater commissioners to receive salaries from the companies they oversee.

Louisiana Democratic Gov. John Bel Edwards ultimately vetoed the bill, but this past March the legislation was reintroduced by Republican Sen. Mack “Bodi” White – who worked at ExxonMobil’s Baton Rouge refinery for 17 years.

While introducing the legislation at a Senate committee hearing in April, White made the point that it is not unusual for people who have experience in an industry to sit on their respective regulatory boards. Such is the case for the state’s Cemetery Board, Board of Medical Examiners and Real Estate Commission, he said.

“I’m going to leave a packet with you to look over the other 25 commissions around the state that have members on their board that vote on their business opportunities,” he said to state lawmakers in a May House committee hearing.

White did not respond to a request for comment.

Having a background in the industry is not the same as being currently employed by a company you’re regulating, critics point out.

“It’s clearly the industry’s way of trying to exercise more control and not caring about the appearance of impropriety, let alone the actual existence of it,”  said Jonathan Leo, an environmental attorney and newly appointed member of the Capital Area Groundwater Conservation Commission, of the bill.

This May, an amendment to the legislation stripped the allowance for water regulators to be employed by industrial users. However, the bill — which passed the Senate and House — still allows private water companies, such as Baton Rouge Water Co., to pay salaries to commissioners.

The governor did not respond to questions from Floodlight about whether he would veto the legislation again this year. There is concern that the Republican majority in the Louisiana Legislature could override a veto.

“To slow down the saltwater movement, there are a couple measures. A scavenger well is one measure. But it’s not a long term measure,” said LSU Environmental Engineering professor Frank Tsai, who has been studying the saltwater intrusion issue into the Southern Hills Aquifer.

A 2020 audit of the state legislature found that Louisiana spent more than $5 million on a dozen water resource and management studies but still lacked a comprehensive water management plan.

In an effort to verify the water use of industry, in May 2021 the commission approved a measure requiring a meter on every well in the district. Previously, the commission relied on companies to estimate their water use. But in February, the Baton Rouge Water Co. sued the commission over the metering measure, arguing that the meters would be inaccurate because of turbulence inside the twisting pipes that transport the water.

“If you don’t have the conditions for them to work, they won’t work,” said Furr, Baton Rouge Water Co’s attorney. Instead, Furr said the commission should be auditing the meters that companies use to self-report their water use. “I don’t know why we wouldn’t try that first,” he said.

Gary Beard, executive director of the Capital Area Groundwater Conservation Commission, disputed the claims. Beard has more than 40 years of experience as a civil engineer, specializing in environmental treatment systems.

“These meters are used throughout the world,” he said.

There remain no measures to limit how much freshwater is pulled from each well.

“Nobody speaks against Exxon in this town,” said Honoré, the leader of Louisiana’s GreenARMY. “They get what the hell they want.”

Sara Sneath is a reporter for Floodlight, a nonprofit climate newsroom that investigates the powerful interests stalling climate action.

Sara Sneath is an environmental journalist who lives in New Orleans with her dog and three bikes.