A survey by LSU’s Reilly Center for Media and Public Affairs showed that two-thirds of Louisiana residents now believe the state is taking a turn for the worse. (Canva image)

For the first time since 2016, a majority of Louisiana residents believe the state is heading in the wrong direction.

A survey released Tuesday by the Reilly Center for Media and Public Affairs, part of LSU’s Manship School of Mass Communication, showed that two-thirds of Louisiana residents now believe the state is taking a turn for the worse.

The report, the first of a six-part series on the annual Louisiana Survey, paints a negative picture about residents’ views of the state. The survey was based on phone interviews or online responses from 508 residents.

Only 26% of those surveyed say they think the state is going in the right direction. That is the lowest percentage since the Manship School began doing the annual survey in 2004.

Christina Stephens, the spokeswoman for Gov. John Bel Edwards, said the Democratic governor knows that the state has been through difficult times.
“That’s why he is focused on leading Louisiana’s recovery from the economic and health impacts of the pandemic and the damage caused by the major hurricanes, fighting for better education funding and pay for our workers, investing the resources we have wisely to improve our infrastructure and protect our state and reducing greenhouse gas emissions to make our future better and support our coastal communities,” she said.
Tanner Magee, R-Houma and the second-ranking Republican in the House, said residents realize that “it’s been a difficult run the last five to six years. The state has endured a downturn in oil and gas, COVID and hurricanes. The economic picture has been tough in addition to the state’s historic problems of poverty, poor health and education. We as leaders have failed to change these issues, and it feels like our challenges are too great.”

The pessimism is widespread across political and demographic backgrounds. Seventy-one percent of Republicans report that they feel the state is headed in the wrong direction and 54% of Democrats agree with them. The numbers are closer among racial identities, with 68% of white and 61% of Black respondents having a pessimistic view, as well as regionally, with 69% of South Louisiana residents and 64% of those living in North Louisiana having a negative view.

Louisiana residents’ faith in their government also fell to the lowest point since the survey began measuring it.

Only 25% of residents say they are either very confident or somewhat confident in the state government to address important problems effectively. This dropped from 41% in 2021 and is several points lower than its previous record low of 33% in 2006. 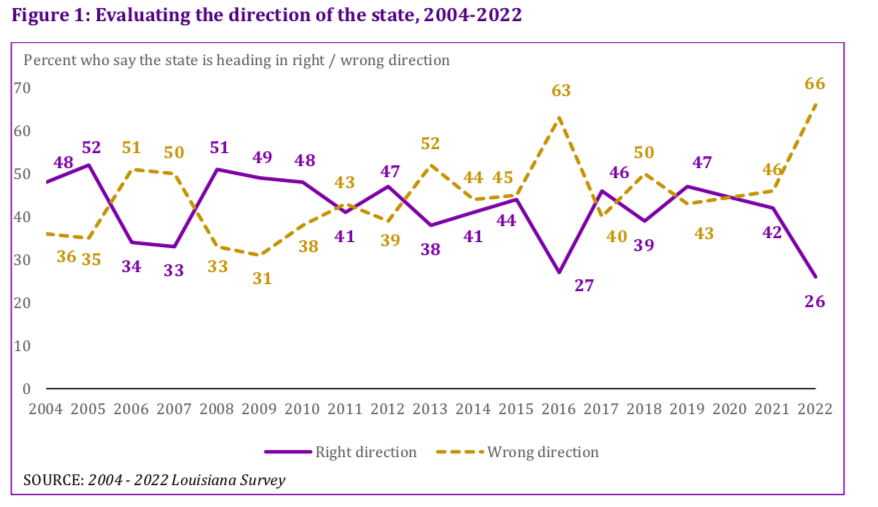 The report indicates that this may be an undercount of residents who are concerned about the economy, as several issues, including economic inequality, the minimum wage and public assistance programs were not tallied as economic issues alongside jobs, inflation and income.

The survey also found that 41% of residents think they are worse off financially than they were a year ago, with just 21% of residents indicating that they believe that they will be in a better position in a year.

When asked to forecast the economic prospects for the state as a whole, 7% said they expect good business conditions a year from now, and 80% predicted that widespread depression and unemployment were more likely in the next five years than a good economy.

The survey indicates that Louisiana residents are largely split over the government’s handling of the pandemic.

Forty-one percent indicate that they approve of how the state handled the COVID-19 pandemic, with 39% disapproving. That is several points lower than last year, when 49% of residents reported approval.

Republicans make up the biggest shift, with those saying they approve of the state’s handling of the crisis falling from 39% to 24% from 2021 to 2022.

The survey also showed major splits in who received the COVID-19 vaccine.

Overall, 65% of respondents reported that they were fully vaccinated.

Additionally, most of those surveyed are opposed to vaccine mandates. Sixty-two percent were opposed to employers mandating the vaccine, with 58% saying they opposed the state government requiring it for public employees.

Sixty-one percent oppose requiring children 12 and older to be vaccinated, and 67% oppose it for children aged 5-11.

In comparison, only 14% to 21% of Republicans support mandating the vaccine in any of these scenarios.

Piper Hutchinson is a reporting intern for Louisiana Illuminator. She has reported extensively on the Legislature and state government for the LSU Manship News Service and The Reveille, where she was named editor in chief for summer 2022.