LSU officials will not testify Thursday before a group of women lawmakers in the Louisiana Legislature about the mishandling of sexual misconduct and domestic violence at the university.

The lawmakers had formally invited several LSU officials — including LSU football Coach Ed Orgeron — to appear at a hearing of the Senate Select Committee on Women and Children. It’s the third hearing the committee has held since the LSU scandal over violence against women broke in November.

Lewis said in an interview with USA TODAY she was punished and reprimanded for years after she objected to former LSU football coach Les Miles trying to dictate what students were able to work in LSU’s football recruiting office. Miles had a preference for hiring blond women and athletics officials pressured Lewis to hire pretty students who were white or light-skinned Black women, she has said.

In light of Lewis’ possible lawsuit, LSU told its employees not to testify under oath before women lawmakers. Members of the LSU Board of Supervisors were also advised not to testify.

“Regrettably, in light of this threatened litigation,” wrote Winston DeCuir, LSU’s general counsel, “it would not be prudent for persons associated with LSU to provide testimony under oath at the senate committee meeting scheduled tomorrow.”

“At this time, I must advise my client to take all prudent steps to defend these legal claims,” he said.

Galligan on Wednesday also deferred questions from a reporter about testifying before the Senate committee Thursday to DeCuir.

Prior to the directive from DeCuir, Orgeron and LSU Athletics Director Scott Woodward had already declined to testify before the women’s committee in person. Instead, they sent written statements to lawmakers. 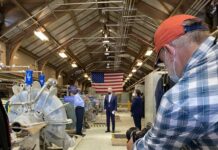 Louisiana governments are expected to apply for aid to fix their water systems Aug. 1, but the applications aren’t yet ready

LSU posted bad information about restraining orders on its website. Why...