When Elayn Hunt Correctional Center opens to visitors for the first time in a year Monday, Wendy Matherne plans to be among the first in line. She has an appointment to visit her son Jonathan West, whom she hasn’t seen in a year.

“I told my son that I don’t care what I have to be behind as long as I get to see his face,” she said Thursday evening. “This is like a shot of hope in what has been a very difficult year.”

Louisiana will start to allow visits from inmates’ immediate family members at state prisons again Saturday, though attorneys and volunteers will still be prohibited from coming to the correctional facilities, according to the Department of Corrections.

Inmates haven’t been able to see their families in person in at least 12 months. The prisons shut down to all outsiders a year ago, on March 12, 2020, when the COVID-19 pandemic started to take off. Louisiana briefly considered reopening prisons for the holiday season in late November, but hastily pulled back on those plans when COVID-19 cases started to spike in the state.

The state has seen a sharp decline in hospitalizations and deaths from COVID-19 recently. Earlier this month, Gov. John Bel Edwards relaxed restrictions on businesses because of the progress the state had made in keeping the pandemic under control. He also opened up vaccine eligibility to all prison employees this week.

If prisoners meet the community-wide criteria to get vaccinated, they also have access to the vaccine. Earlier on in the vaccine process, a large number of prisoners who were offered the vaccine were opting to get it.

The prison visits will still be more restricted than they were prior to the pandemic.

Family members and prisoners will not be able to touch each other and must be kept at least six feet apart. A piece of plexiglass will also separate them. Prior to the pandemic, people were allowed to at least hug briefly at the beginning and end of their visits — and they weren’t typically separated by a barrier.

The visits will also be shorter — just 45 minutes or an hour — than they were before the pandemic. Prior to COVID-19, some visits were allowed to carry on for a few hours.

Some families of incarcerated people are still going to wait a little longer before scheduling their visit.

Jessica Peacock lives in Oklahoma and said it’s not worth the money she would have to spend to visit her husband, Shane, at Hunt in St. Gabriel for just an hour. The prison also told Peacock this week that neither of her children — who are 12 and 13 years old — would not be able to come in with her. Hunt is not allowing people under 18 into the facility yet, she was told.

“Driving 12 hours for a one-hour no-contact visit? We’ve decided it isn’t worth it,” Peacock said. “We are going to wait out this month and see if it opens up more in April.”

Other prison advocates said they hope the prison system will open up visitation to include unmarried romantic partners, extended family and friends — which are still on the prohibited list for visitation. They said some inmates don’t have any immediate family members that normally visit them, but have close relationships with other people.

There is also a possibility that family visits to a particular facility could be shut down temporarily and without much warning. The prison system said visitation will be set on a rotating basis by dorm, such that all the inmates living together will have their visits at the same time. If an inmate in a dorm gets COVID-19, then visitation for the entire dorm will be suspended until the inmates housed in it are no longer contagious.

Any prison where the COVID-19 cases exceed one half of a percent of the prison population will also have visitation put on hold until their infection rate comes down, according to the Department of Corrections.

The prison system has been trying to make up for the absence of visits over the last year by providing two free 10-minute phone calls to every inmate per week. It will continue to offer those benefits through the end of the month, said Ken Pastorick, spokesman for the prison system.

For the first time ever, the Department of Corrections has also been offering live video chats to inmates and their families and allowing people to send prisoners 30-second video downloads — though those aren’t offered for free and are more expensive than other forms of communication.

Phone calls — beyond the two 10-minute ones currently offered  for free  — cost 21 cents per minute. Each electronic stamp costs 40 cents. The 30-second downloadable videos cost $1.20 to send, and the live video chats cost $9.95 for every 30 minutes of air time.

Pastorick said the video chat options will likely continue, since they help people who live long distances from their loved ones communicate more easily when they can’t visit each other in person.

There were complaints for much of the pandemic that the video chats didn’t consistently work and froze often, but Matherne and Peacock both said their quality had significantly improved since November. Both of them said the video chats now rarely freeze when they use them.

Peacock still said her family is struggling with the expenses because her husband typically earns some money selling crafts he makes in the prison hobby shop. They put that money toward covering the cost of family visits, phone calls and sending photos to each other. But her husband hasn’t been able to sell his crafts because the Angola Rodeo and other events where he sells his woodworking were canceled this year.

In the middle of a pandemic, they’ve also wanted to check in more to make sure everyone was safe and healthy. It meant more phone calls and video chats than usual, Peacock said.

Video chatting, however, isn’t a substitute for seeing each other in person. Peacock’s husband is acutely aware that his daughters — as a preteen and young teenager — have done a lot of growing over the past year.

“At that age, you kind of hit the fast forward button on growing up,” Peacock said. “He says he knows it’s only been a year since he’s seen them, but it feels like he missed a lot more than that.”

Outside of families, the prison system did not offer a timeline for when it would open up to volunteers and attorneys for in-person visits. A lot of programs and educational classes that volunteers run in the prison have been on hiatus for the last year due to COVID-19.

Lawyers who would typically meet with their incarcerated clients face-to-face are now conducting those meetings mostly over the phone. At a couple of facilities — Hunt and Dixon Correctional Institute — they are also able to use Zoom to see their clients, but it’s still a challenging environment for a legal consultation, advocates said.

“It’s been difficult to prepare clients for hearings,” said Kerry Meyers, deputy director of the Parole Project, a few months ago. The Parole Project provides legal help and coaching to longtime inmates appearing before the state’s parole board for release.

“You don’t get the same interaction over the phone as you do sitting across from someone,” Meyers said.

Up until this point, Louisiana has one of the most restrictive states when it comes to prison visitation. At the beginning of March, it was one of only eight states that still completely prohibited visitors, according to The Marshall Project.

Louisiana also sticks out for prioritizing family visits over attorney visits. It is one of the only states to continue to restrict attorneys from seeing their incarcerated clients. In 30 other states, attorneys are allowed to visit inmates in person, even as “normal visitation” continues to be shut down, according to The Marshall Project.

Prisoners were unusually prone to contracting COVID-19, particularly due to their communal living conditions, but visitation for other vulnerable groups — like nursing home residents — opened up months ago in Louisiana. 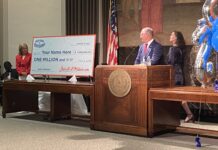 Families encouraged as some visitation resumes at Louisiana prisons, but hope for more

Rental assistance in COVID-19 relief package ‘about a third of what...