Gov. John Bel Edwards expanded access to COVID-19 vaccines in Louisiana on Tuesday, adding people 16 and older who have at least one qualifying medical condition and those who work in prisons, group homes and other congregate living facilities to the list of eligible recipients. The announcement comes on the one-year anniversary of Louisiana’s first confirmed case of the novel coronavirus.

News of the expansion leaked Monday evening as health care providers, who asked to not be named, shared with the Illuminator a letter from the Louisiana Department of Health that detailed the new list of eligible vaccine recipients. Officials in the Edwards administration confirmed the letter’s authenticity that night before the governor, himself, confirmed it at a Tuesday press conference.

“Probably the worst kept secret in the history of secrets,” Edwards said jokingly. “Actually, it wasn’t a secret at all.”

The coronavirus vaccine is now available to anyone 16 and older who has at least one health condition that makes them more likely to suffer a serious complication from COVID-19, based on federal health guidance. Previously, people were only eligible if they were 55 or older.

Only the Pfizer vaccine is available to 16-year-olds and 17-year-olds. The Moderna and Johnson & Johnson vaccines are not approved for anyone younger than 18.

Until Tuesday, Edwards had instituted a relatively narrow set of criteria for vaccine distribution compared to some neighboring states, largely in an effort to ensure the elderly had ample opportunity to get vaccinated first. In Louisiana, over 68 percent of those who have died from COVID-19 have been over age 70, and 50 percent have been over age 76, according to the health department.

But over the weekend, health care providers reported having hundreds of extra vaccine shots at some large vaccination sites in New Orleans. The lower demand for the drugs — coupled with an expected surge in supply — contributed to the governor’s decision to greatly expand eligibility moving forward.

“We came to this decision after hearing from our providers over the weekend that there’s a little slack in the appointments and that they were able to accommodate and ready to accommodate more people,” Edwards said. “Also, we’ve had a very stable supply, especially of the Moderna and the Pfizer, so we feel comfortable about what’s coming ahead.”

Tuesday also marked the one-year anniversary of Louisiana’s first confirmed case of COVID-19, and since then the state has had more than 430,000 cases with nearly 10,000 resulting in death. More than 6.1 million tests have been administered. The day also brought with it a positive milestone, the governor said, as the number of fully vaccinated Louisianans now exceeds the number diagnosed with COVID-19.

On Monday the governor’s staff placed 9,758 white flags on the lawn of the capitol building — one for each Louisianan killed by the virus. That number climbed by 11 on Tuesday. 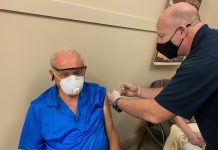 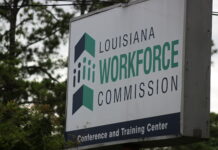 Louisiana legislators want ‘a seat at the table’ when it comes...