Louisiana Secretary of State Kyle Ardoin canceled open bidding for new voting machines for the state after interested suppliers and some of his fellow Republicans complained — unfairly, he said — about the proposal process. His announcement Wednesday marks the second time since 2018 the secretary of state’s office has had to delay a 10-year contract for election machines potentially worth $100 million.

The request for proposals (RFP) for new voting machines to replace Louisiana’s nearly 30-year-old fleet of machines was compliant with all applicable election and procurement laws, Ardoin said in a Wednesday press release. However, questions arose regarding the direct recording electronic (DRE) voting machine technology, which is required by law, and how it impacts the level of competition for this solicitation. Ardoin previously canceled a RFP for voting machines in December 2018.

“We cannot let election administration become just another political football for politicians or voting machine vendors to kick around, without any understanding or concern for the consequences,” Ardoin said in the release. “Simply put, no other agency in Louisiana has a higher requirement for precision than the Secretary of State in conducting our elections.”

The complaints came from two companies that accused Ardoin of drawing the RFP terms too narrowly in a supposed effort to favor the state’s current vendor, Dominion Voting Systems. In recent months, he has been trying to quell false claims of conspiracy theories from some members in his party regarding Dominion.

On Twitter Wednesday, she said she was glad to hear the news of the cancellation.

“For voters to trust our election system, we must conduct a thorough, transparent, & open process similar to other states,” Hewitt tweeted. “I look forward to restarting this process & providing the oversight & public input that was so badly missing from the 2 previous failed attempts.”

At a House Governmental and Affairs Committee meeting in January, Rep. Valarie Hodges, R-Denham Springs, tried engaging Ardoin in a discussion about Dominion, which at that time had become the target of baseless conspiracy theories pushed by former President Donald Trump and other Republicans who alleged — falsely — that the company is owned by a Venezuelan dictator and engaged in a so-called deep-state plot to steal the election.

“When is the contract for Dominion up for renewal?” Hodges asked Ardoin at the meeting, which was called to review COVID-19-related voting accommodations in the state’s new emergency election plan.

Ardoin leaned back in his chair, took a long deep breath, grinned and sat silently with his chin resting in his hand until the acting committee chairman interjected and stopped Hodges’ line of questioning due to it being off-topic.

Ardoin placed blame on GOP misinformation, saying, “Because of this, I am withdrawing the RFP to spend the next few months seeking to undo the damage to voter confidence done by those who willfully spread misinformation and… Click To Tweet

In his statement Tuesday, Ardoin placed blame on GOP misinformation, saying, “Because of this, I am withdrawing the RFP to spend the next few months seeking to undo the damage to voter confidence done by those who willfully spread misinformation and disinformation.”

“While we respect calls for more discussion of the process, it must be noted that Louisiana began preparing for this acquisition following the 2016 federal election cycle,” he added. “It was never rushed or inconsistent with accepted budgetary or procurement laws. A glaring omission from the calls for more discussion is any credible criticism of our current election process.” 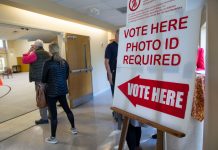 ‘I just don’t trust the system any more’: Voters on edge...