WASHINGTON — The extreme cold weather across much of the country has delayed 6 million COVID-19 vaccine doses, slowing a vaccination rate that has been steadily rising since the Biden administration took office last month.

Slavitt told reporters that some states have been able to use existing inventory to make up for the delayed doses, and that 1.4 million of the delayed doses were in transit Friday. The remainder of the backlog is expected to be delivered within the next week, he added.

Earlier this week, Biden’s COVID-19 advisers had touted an average vaccination rate of 1.7 million per day, up from less than 900,000 when Biden took office.

The administration has sought to increase doses going to states, as well as set up mass-vaccination centers across the country. Five new sites will be opening within the next two weeks, Slavitt said Friday — one in Pennsylvania, at the Philadelphia Convention Center, and four across Florida, in Orlando, Miami, Jacksonville and Tampa.

Federal officials emphasized that they are working with states to determine where those new vaccine sites are located.

But as state and federal officials attempt to continue increasing the vaccination rate, they also need to get some areas back to where they were before the weather delays.

Millions of people in Texas, Louisiana and other areas affected by the deadly winter storms have faced days without power in their homes and businesses. Some 2,000 COVID-19 vaccination sites also are in areas with power outages, Slavitt said.

That means those vaccine sites haven’t received doses, which have strict requirements for maintaining a certain temperature and being used within a set period of time.

“We don’t want to ship doses to those locations and have them sitting at a site where they might expire, so the vaccines are sitting safe and sound in our factories and hubs, ready to be shipped out as soon as the weather allows,” Slavitt said.

States across the country have seen the ripple effects of the winter storms.

Virginia officials said Thursday that an estimated 106,800 vaccine doses would be delayed, forcing multiple vaccination events scheduled for the next few days to be postponed. Some Virginia health care providers also reported delays of the supply kits needed to administer vaccines.

As of Thursday, North Carolina had not yet received this week’s doses of the Moderna vaccine, and had received only a limited number of the state’s Pfizer vaccine doses, state officials said. 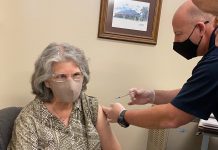 CDC: It’s OK for vaccinated grandparents to visit family if no risk for severe disease