Once you moved past the initial shock of seeing former President Donald Trump’s murderous goons marauding the U.S. Capitol, were you even one bit surprised to see that one guy parading inside with a Confederate battle flag?

Of course you weren’t. You know that the people who’d erect a gallows outside the U.S. Capitol and start a manhunt for public officials certifying Trump’s election defeat wouldn’t hesitate to wrap themselves in what has long been the go-to banner for White Americans who won’t hear that they can’t have their way.

There were also plenty of American flags being toted Jan. 6, one of which was even weaponized by a man who used the attached pole to beat a police officer. But the American flag belongs inside the U.S. Capitol. The Confederate flag does not.

People who march with that flag — or alongside those marching with it — aren’t demanding  freedom from oppression. They’re declaring a freedom to oppress: to offend, hurt, even terrorize and murder those they believe aren’t deserving of freedom themselves.

Taking its cues from an aspiring despot who similarly can’t abide not getting his way, the Jan. 6 mob decided that Joe Biden’s 7-million-vote margin of victory didn’t matter — indeed, wasn’t even real — because it wasn’t what the mob or Trump wanted.

That’s that old Confederate spirit at play: Claim power even after defeat.

The debate over the removal of New Orleans’ Confederate monuments starting in 2015 was often billed as a fight over history.  But it was always about the present. Neither side of the debate would have been so passionate over monuments that didn’t still have meaning.

So what would removing them proclaim?

Because no Democratic candidate for president has won the White vote since 1964, it’s fair to say that every Democrat who has been elected in the meantime has reached the White House over the objections of White people.

Previous candidates who’ve lost to Democrats have gracefully conceded. This time, a president who’d been repeatedly stirring up his followers’ Confederate spirit gave them an order to “fight like hell.”

Why wouldn’t people who’ve been taught to idolize men who attacked their government — and whose favorite politicians constantly feed them the lie that they’re being picked on and disregarded — believe it improper to attack that same power when things don’t go their way?

Where are the conservative politicians with the guts to tell their supporters that the Confederates were wrong and that it’s time to stop praising them as heroes? If they exist at all in Louisiana, they’re in short supply.

Last year, an amendment to the National Defense Authorization Act left Congress with a choice:  fund the U.S. military — as Congress always has — or keep the names of Confederate officers on 10 U.S. Army bases.

Sen. John Kennedy, House Republican Whip Steve Scalise and Rep. Clay Higgins chose to keep the Confederate names.  But it was Kennedy’s quote that will be remembered. He said, “I think history will show that in the 18th century, in the 19th century, and well into the 20th century, there were many non-Confederate generals, soldiers and others, in both the South and the North who practiced racial discrimination, anti-Semitism and misogyny. I don’t think we ought to just pick on the South.”

Kennedy would have fit right in with those who stood inside the New Orleans City Council chambers and argued for the preservation of Confederate monuments by bringing up Abraham Lincoln’s racism.

But there’s something else wrong with Kennedy’s quote: namely, the refusal to acknowledge the South as a multiracial, multicultural, multiethnic place where one is likely to find the greatest concentration of people disgusted at the multiple honors bestowed upon slavery-supporting insurrectionists.

One would have hoped that something would have clicked during the Capitol riot for all the Louisiana politicians who’ve played nice with Confederate sympathizers and endorsed Confederate mythology.

Jan. 6 is what insurrection looks like. It’s not heroic. It’s ugly and vile and murderously selfish.

Four insurrectionist monuments were taken down in New Orleans, but there’s work yet to be done, work that includes conservative politicians not only disavowing the big lie of a Trump victory but the big lie that the White South led a noble insurrection. 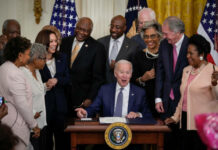 As Trump’s mob ransacked the Capitol, a Confederate flag was the least surprising sight

It’s time for Louisiana to end juvenile life without parole |...

In the case of Ka’Mauri Harrison, it’s the Jefferson Parish School...