WASHINGTON—Seven U.S. Senate Democrats on Thursday  urged the chamber’s ethics panel to look into Sen. Josh Hawley’s unsubstantiated claims of voter fraud in connection with the deadly assault on the U.S. Capitol earlier this month.

“Senators Ted Cruz and Josh Hawley lent legitimacy to President Trump’s false statements about election fraud by announcing that they would object to the certification of electors on January 6,” according to the Thursday letter.

The Democrats said Hawley and Cruz’s objections to the certification of Electoral College votes declaring Joe Biden the winner helped perpetuate the falsehood that the presidential election was stolen.

“The question the Senate must answer is not whether Senators Hawley and Cruz had the right to the object to the electors, but whether the senators failed to “(p)ut loyalty to the highest moral principles and to country above loyalty to persons, party, or Government department” or engaged in “improper conduct reflecting on the Senate” in connection with the violence on January 6,” the senators wrote.

They said the committee should fully investigate the senators’ conduct to fully understand their role.

As Congress was set to ratify the Electoral College votes, President Donald Trump held a rally blocks from the Capitol and said without evidence that the election was stolen and encouraged his supporters to “fight like Hell” and march on the Capitol.

Five people died in the mayhem, including a U.S. Capitol Police officer, and dozens of police officers were injured.

Hawley was photographed outside the Capitol that day pumping his fist and giving his support to the pro-Trump crowd contesting the validity of the presidential election.

The seven Senate Democrats who signed the letter are Tim Kaine of Virginia, Sheldon Whitehouse of Rhode Island, Tina Smith of Minnesota, Richard Blumenthal of Connecticut, Mazie Hirono of Hawai’i, Ron Wyden of Oregon and Sherrod Brown of Ohio.

The senators also want the Select Committee on Ethics to investigate any fundraising methods that Cruiz and Hawley used by objecting to the Electoral College vote. Hours after the insurrection, Cruz and Hawley sent fundraising messages, touting their efforts to challenge the presidential election. 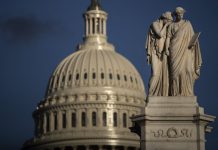 Lafayette used cybersurveillance on activists and nonprofits amid strange warning of...