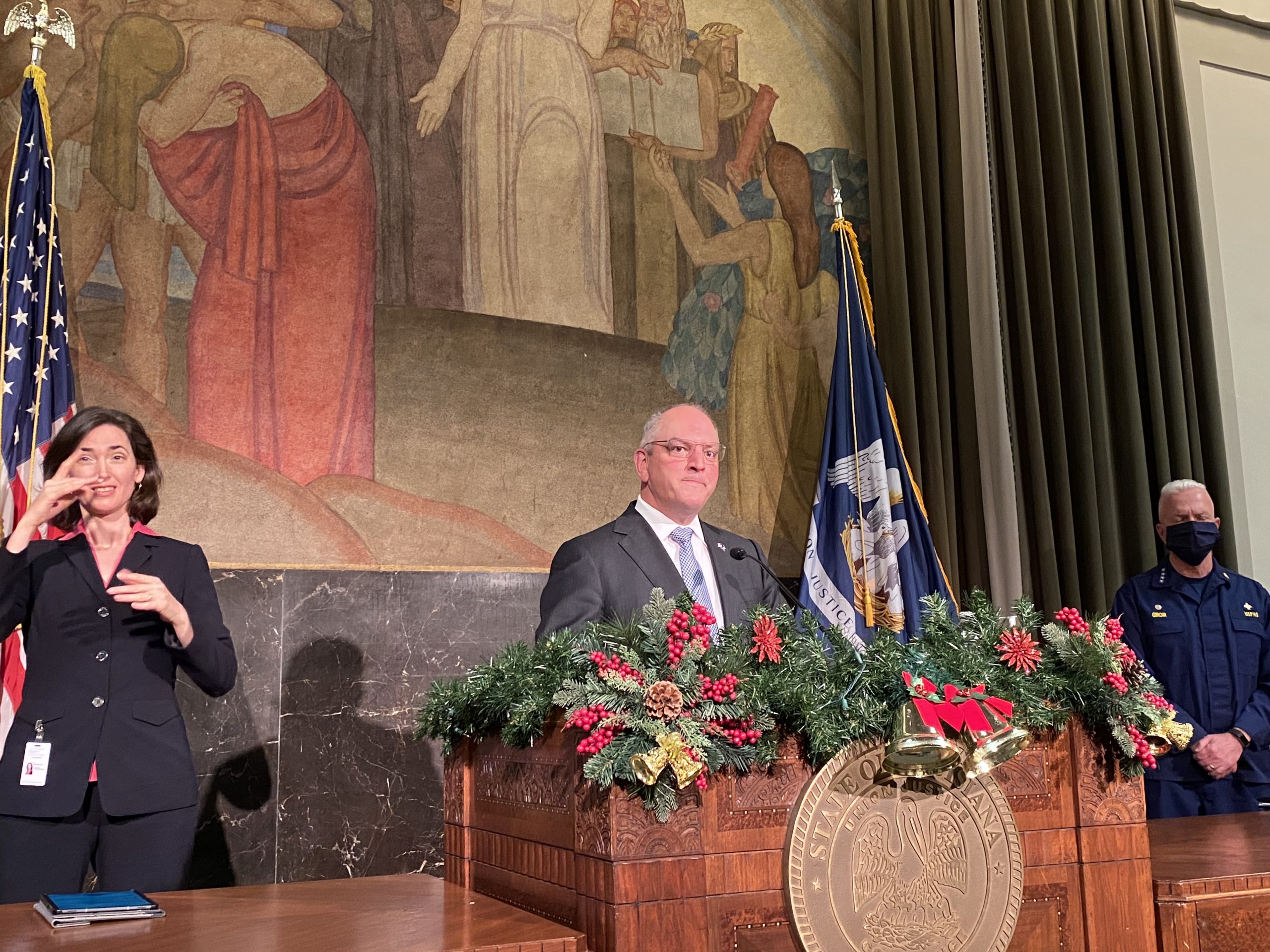 In a press conference held two days before Thanksgiving, Gov. John Bel Edwards pleaded with residents of the state to forgo their typically large family gatherings in an attempt to slow down another spike in COVID-19 cases.  On Tuesday, three days before Christmas, Edwards called the state’s death toll of 7,158 people “unfathomable” and again pleaded with the state’s residents to break with their traditions and do their part to help the state’s health crisis from worsening.

“It’s hard to wrap our heads around a number this large,” Edwards said. “It also means as we head into this holiday period, there will be that many empty chairs in homes around dinner tables.”

“If we insist on traveling and having those holiday-related activities like we normally would, then we’re obviously going to be in even more trouble,” Edwards said. “So we’re asking people not to do those things.”

At last month’s Thanksgiving week press conference, Edwards said he was moving the state from Phase 3 of its coronavirus reopening plan back to a more restricted “modified” Phase 2 for 28 days, but he predicted that the order would likely need to be renewed around Christmastime.  He said Tuesday that he’s renewing the order and that the state will remain in its modified Phase 2 for the next 21 days.

That means the statewide mask mandate will stay in place, seating capacity at restaurants will stay at 50 percent, bars in parishes with a percent positivity above five percent will be closed to indoor activity and indoor gatherings will be limited to 25 percent of the room’s capacity .

The percent positivity rates of people in Louisiana getting tested for COVID-19 has declined slightly from 10.2 percent on Dec. 2 to 9.3 percent on Dec. 9, which Edwards said he hopes is a sign of a future trend of fewer cases, hospitalizations and deaths.

“Even though it appears we’re starting to plateau, we’re plateauing at a very high level,” Edwards said. “That is very concerning.”

Edwards said his biggest concern is the 1,647 COVID-19 hospital patients in the state, topping the peak of the state’s summer surge when hospitals had trouble keeping up with the people coming to their emergency rooms.

LDH reported 22,108 Louisianans have already been vaccinated, and Edwards said he believes “many thousands” more have been vaccinated due to some lag in the reporting. The state is still working through vaccinating the priority 1 group, Louisiana’s frontline workers and nursing home residents and staff — around 210,000 people.

Edwards didn’t have many specifics about who will be in the second priority group, but he did say people with end-stage renal disease, including patients who require dialysis, and people with other serious health conditions will be in that group.

“We are working to get more and more of our vulnerable populations immunized,” Edwards said. He said it will take months to vaccinate the general population, but, he said, “There’s light at the end of the tunnel.”

“While there are the earliest signs we’re doing better, because of the elevated numbers we’re talking about, we’re in a perilous place,” Edwards said.