A Human Development report of Louisiana found major disparities in quality of life between Black and White Louisiana residents, and gaps between Louisianans and the rest of the country.

A Portrait of Louisiana 2020: Human Development in an Age of Uncertainty, a new report from Measure of America, directed and authored by Kristen Lewis, uses the American Human Development Index (HDI) to measure life quality of people by “combining official data on health, education and income” and combines them into a single number from 0 to 10.

For example, the HDI score for the overall United States is 5.37. Louisiana scores more than a full point below the rest of the country: 4.35. The state’s lower score is due to health, economic and educational factors such as a shorter life expectancy, significantly higher maternal mortality rates and higher child poverty rates.

“These wellbeing gaps we see in the state are a result of policy decisions,” Lewis said. “There is nothing inevitable about what we see.”

“The racial disparities we see are very much the result of centuries of racism,” Lewis said.

A specific example Lewis pointed to was redlining in Shreveport. The South Highland area had the highest HDI in Caddo Parish at 8.55, but just across the highway in Caddo Heights, the score is 1.51 — more than seven full points lower. 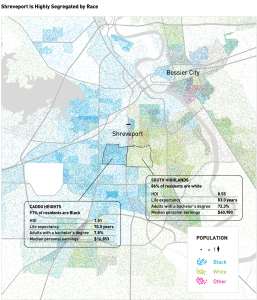 “You can look at these two neighborhoods and think ‘wow!’ and think of all sorts of reasons why this might have happened,” Lewis said. But she said the distinction between flourishing and struggling neighborhoods match redlining maps from the New Deal era when the government was trying to get people back into homes and recover from the Great Depression.

These maps classified neighborhoods by “Mortgage Risk,” and by labeling nonwhite and lower income communities as “risky investments,” nonwhite communities were blocked from receiving federally guaranteed housing loans during the New Deal era.

“The Home Owners’ Loan Corporation map of Shreveport shows that South Highlands was within a green zone, while Caddo Heights was made up of red and yellow zones labeled ‘hazardous’ and ‘definitely declining,’” according to the report, so a family living in the South Highlands area would be able to receive a federally guaranteed housing loan, while a family in Caddo Heights would not.

“These deep disparities didn’t just sort of appear and come out of nowhere, they’re really the result of these institutionalized policies and racial segregation,” Lewis said. “And these disparities in loans received, which kept Black families from building wealth through homeownership, which is the way most Americans do” continue to hurt those families generations later.

As the poverty rate increases among demographics, life expectancy decreases. Black women in Louisiana are four times as likely as White women to die from complications related to pregnancy and the Black infant mortality rate, 10.5 infants per one thousand live births, is more than twice the rate for White Louisianans.

Part of the reason Black families score worse on the health index is due to less financial access to better healthcare. Another reason is due to implicit bias and structural racism, according to Dr. Veronica Gillispie-Bell, medical director of the Louisiana Perinatal Quality Collaborative in the Louisiana Department of Health.

Gillispie-Bell also cited a 2016 study from the University of Virginia where 52 percent of 282 White medical students and residents said Black people have thicker skin and don’t feel pain in the same way. Gillispie-Bell said these implicit biases lead doctors to not adequately treating patients’ pain, which leads to a higher mortality rate of Black Americans. 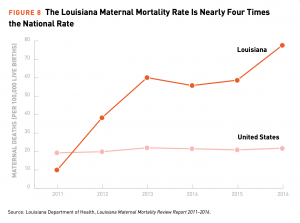 While Louisianans may be tired of hearing why Louisiana is statistically bad over and over again, Lewis said she hopes the message of her study is that “the people in power have created this situation, so people in power can also uncreate it.”

Louisiana is a state that’s very rich in natural resources, but policy decisions have led to a vast amount of inequality with money concentrated at the top, Lewis said. “And it doesn’t seem like Louisiana has been as systematic as it could be in reinvesting that money into people and into their well-being. And we see that in terms of life expectancy and educational attainment.”

Lewis said she believes the next steps for improving the state’s HDI is targeting parishes where COVID-19 hit the hardest and/or scored under 3 on the HDI.

“Just as policy has created inequality, so too can different policies create greater equity and expand the choices and opportunities of Louisiana,” Lewis said.

JC Canicosa is a former Louisiana Illuminator reporter. Prior to working with the Illuminator, Canicosa worked for Investigate-TV and The Loyola Maroon. Canicosa earned a bachelor’s degree in journalism from Loyola University New Orleans. At Loyola, he was the senior staff writer at The Maroon and the president of the school's chapter of the Society of Professional Journalists. Off the clock, Canicosa enjoys playing basketball, watching movies and dabbling in comedy writing.