The U.S. Supreme Court on Monday vacated a Fifth Circuit Court of Appeals decision that said a Baton Rouge police officer can sue a protest leader for the actions of another protester during demonstrations in Baton Rouge in 2016.  That unidentified protester struck the officer with a “piece of concrete or a similar rock-like object” after a large crowd gathered on a highway to express anger at Alton Sterling’s killing at the hands of Baton Rouge police.

The case arises out of a lawsuit, Doe v. McKesson, in which the injured police officer sued Black Lives Matter activist DeRay McKesson for the injury he suffered July 9 of that year. A Baton Rouge federal court agreed with McKesson’s argument that he was within his First Amendment rights to protest and could not be sued for the criminal actions of another. McKesson is not alleged to have incited, ordered or endorsed the rock throwing.

However, after the officer appealed and argued that McKesson “negligently staged the protest in a manner that caused the assault,” the U.S. Court of Appeals for the Fifth Circuit ruled in the officer’s favor, finding that he could sue McKesson. McKesson appealed the case to the Supreme Court.

On Monday, the U.S. Supreme Court directed the Fifth Circuit Court to ask the Louisiana Supreme Court to address whether state law allows the organizer of the protest to be held liable for injuries the officer suffered.

In a press release Monday, the ACLU of Louisiana said that the Fifth Circuit’s decision, if left standing, would have dismantled civil rights-era Supreme Court precedent safeguarding the First Amendment right to protest, the ACLU said in a press release.

“This officer’s outrageous lawsuit against DeRay McKesson is a threat to every American’s right to protest,” said Alanah Odoms, executive director of the state ACLU.

“I’ve been fighting this case for four years,” McKesson said. “Today’s decision recognizes that holding me liable for organizing a protest because an unidentifiable person threw a rock raises First Amendment concerns. I’m gratified that the Supreme Court vacated the ruling below, but amazingly, the fight is not over.”

The officer’s attorney, Donna Grodner, was not immediately available for comment Monday. 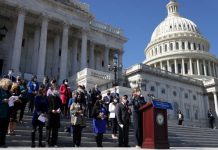 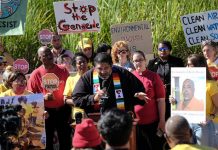