“Zeta is literally on our doorstep,” Gov. John Bel Edwards said in a press conference on Wednesday. Edwards said residents in Southeast Louisiana need to “now be where you want to be as you ride the storm out and get you and your family in the best posture possible for the storm.”

Edwards said, “All of Southeast Louisiana remains at risk for wind damage,” quoting predictions that said the New Orleans area should expect wind speeds of over 100 MPH.  Originally forecast to be at Category 1 strength or just below, Hurricane Zeta was approaching the New Orleans area as a Category 2 storm Wednesday afternoon and nearly a Category 3.  A 3 p.m. report from the National Weather Service in New Orleans said the storm has sustained winds of 110 mph.  Category 3 begins at 111 mph.

The storm, which is across the Gulf of Mexico and toward the coast at 18 mph is, because of that speed, expected to pass through the state fairly quickly.

“If you have a storm surge warning, which we do, then by definition, it’s life threatening,” Edwards said.

This is only the second time in history that there has been a storm named Zeta. In fact, it’s only the second time in history that there have been more than 21 named Atlantic Storms and the list of Latin alphabet names has been exhausted. The only precedent for Greek alphabet storms is 2005. Zeta, the sixth letter of that alphabet, was the last storm of 2005 and it formed December 30, a month after the season’s official end. The current Zeta formed Sunday, 66 days earlier. Hurricane season ends Nov. 30 this year. 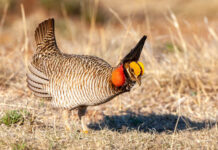 Endangered species to get a reprieve under Biden administration plans

Air Quality Regulators in ‘Cancer Alley’ Have Fallen Dangerously Behind

This session made the 8th consecutive year the Louisiana Legislature heaped...