The Louisiana Senate killed a bill meant to prevent local governments from “defunding the police” by not taking it up for a vote before the legislature ended its special session Friday.

“Mr. President: I’m going to be a long, long time because I have a lot to say,” Luneau responded.

At that point, senators decided they weren’t willing to postpone the end of their special session by listening to Luneau talk more — so they agreed to pull the bill from consideration.

The bill would have allowed the legislature’s joint budget committee to withhold construction dollars and other funding from local governments who cut their law enforcement budgets by at least 25 percent. The original proposal was sponsored by Rep. Lance Harris, R-Alexandria.

Harris insisted he was pushing the legislation because he had seen efforts to “defund the police” in large cities elsewhere in the country — like Minneapolis, Seattle, Portland and Austin. But he has not identified a local government in Louisiana that is discussing a “defund the police” policy.

That’s led some critics to say that Harris’ bill is a solution in search of a problem. Some lawmakers implied that Harris might only be sponsoring the legislation because he wants media attention for his run  for Congress. Harris is on the Nov 3rd ballot for the 5th Congressional District.

Most “Defund the police” efforts call for money to be shifted from law enforcement agencies to social service programs who treat people struggling with addiction and mental health challenges. It’s become a rallying cry for the Black Lives Matters movement, especially after the deaths of George Floyd and Breonna Taylor, a Black man and woman who were killed by police in Minnesota and Kentucky earlier this year. 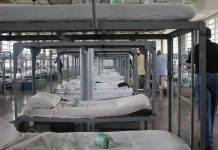 Biden urges Congress to act on policing reform after meeting with...