New Orleans Mayor LaToya Cantrell wants the Louisiana Legislature to allocate more federal pandemic relief funding to her city, but her efforts seem like a long-shot at this point. The state has other  priorities and dwindling dollars.

It also doesn’t help that Republicans, who hold a majority of the seats in the Legislature, are frustrated with Cantrell’s COVID-19 restrictions. New Orleans is operating under more stringent rules than the rest of the state. Several said they felt like those limitations — rather than the pandemic itself — are affecting New Orleans’ ability to collect tax revenue.

Nevertheless, Cantrell appeared at a hearing before the Louisiana House budget committee Tuesday (Oct. 13) to make her case in person for more funding. She said New Orleans is facing a $150 million deficit, equal to about 20 percent of the city’s total revenue.

“As you know, where the city of New Orleans goes, it does impact the state as a whole,” Cantrell said. “I urge you: Don’t leave us behind.”

Cantrell has already required the city’s 4,700 employees to take six days worth of furlough before the end of the year, but her administration says that won’t be enough to make up the shortfall. The city may have to implement more furloughs and possibly layoffs, said Gilbert Montano, New Orleans’ chief administrative officer.

“We are completely cut to the marrow. We are to the bone,” Montano said.

“They are on furlough every day,” he said.

Rep. Raymond Crews, R-Bossier City, urged the city — which has stricter rules for bars and restaurants than the rest of Louisiana — to loosen its restrictions.

“If you opened up more quickly, you might be able to receive more of that revenue,” Crews told the mayor.

Cantrell responded that she intends to loosen more restrictions on bars this week, allowing people to drink on location in outdoor spaces. She also said the city has worked hard to change zoning laws so that restaurants have more places to put outdoor seating.

But Cantrell also argued that New Orleans can’t be compared to the rest of the state. The city had one of the worst COVID-19 outbreaks in the world at the start of the pandemic. It was forced to spend a lot of money on protective gear and other preventative measures earlier than other communities, she said. The  city’s revenue is also way down because New Orleans is dependent on tourism — and people aren’t traveling during the health crisis.

The mayor also thinks the state owes the city more money for COVID-19 expenses. New Orleans is projected to get $60 million of the $525 million in federal funding available to Louisiana local governments to cover pandemic-related expenses. That doesn’t cover all of the city’s coronavirus bills, which will top $200 million, Cantrell told lawmakers.

The Edwards administration is in agreement that New Orleans has more expenses than the state has money available to help it — at least somewhat in agreement.

Louisiana’s Division of Administration has determined that about $90 million of the city’s COVID-19 expenses meet the criteria needed to get the federal funding available to local governments. But the city is only scheduled to be reimbursed for $60 million because the state also has to help other parishes and cities. Nearly every community in Louisiana has had to spend money to deal with the pandemic.

The Edwards administration has divided up the $525 million the state set aside for local governments based on the size of the community and the rate of its COVID-19 infection. Larger communities with extensive outbreaks are slated to receive more money. Still, some of Louisiana’s bigger jurisdictions — New Orleans, East Baton Rouge and Caddo parishes — are maxing out on the dollars available to them.

Republicans lawmakers are not inclined to divert a significant chunk of the $525 million that has been allocated to other communities back to New Orleans. And funding that could be left over from the state’s other large COVID-19 fund — a $275 million business grant program — is being eyed to prop up the state’s depleted unemployment trust fund.

That could be why the Louisiana Municipal Association is focusing a lot of its energy on Washington D.C. The group hopes that Congress might provide more relief to local and state governments after the November election. Specifically, they want Congress to help backfill some of the tax revenue that cities like New Orleans lost because of COVID-19.

“I think the only option we have is a federal stimulus package,” said John Gallagher, executive director of the organization.

Gallagher said New Orleans is not the only local government facing massive budget problems in Louisiana. Some smaller cities — including Ruston and Pineville — have already had to lay off public employees because of revenue shortages. 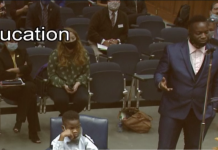 Bill addressing discipline in virtual classrooms is changed to cover only...

Bill to prohibit schools from giving names of contagious students to...

Hurricane Delta will make landfall as a Category 2

Louisiana will stay in Phase 3 until Nov. 6

Bill that would shield the eviction records of people who can’t pay rent during...