When Ku’Mauri Harrison’s little brother tripped over BB gun while Ku’Mauri was taking a test in his virtual classroom, he set off a series of events that led to Ku’Mauri’s suspension from Woodmere Elementary School in Jefferson Parish, general outrage from the public and an appearance before a friendly Louisiana House Education Committee that moved forward the “The Ka’Mauri Harrison Act” to register their disapproval at what happened to the 9-year-old.

After his brother tripped over the gun, Kamauri moved it out of his brother’s way but to a place where it became visible on the screen of his virtual class.  Because he displayed “a facsimile weapon while receiving virtual instruction,” he was initially recommended for expulsion but was eventually given a six-day suspension from school.

Ku’Mauri introduced himself to the committee Wednesday and then his father, Nyron Harrison, explained what happened. Nyron Harrison said he rushed home once he was told that his son — through no fault of his own — was in trouble. “I knew the seriousness of a Black child having a firearm, exposing a firearm to a classroom session,” the father said. “Ku’Mauri was pleading with me to hear his side of the story… His teacher basically told me the same story that he told me.”

All the members of the committee expressed sympathy for what had happened to Ku’Mauri’s and thanked him and his father for coming to testify. Rep. Ray Garofalo, the House Education Committee chairman, said “The Ka’Mauri Harrison Act,” which the committee passed unanimously, will address the deficiencies in the virtual disciplinary process by requiring school districts to write policies specifically for online learning and to give families more options to appeal disciplinary decisions. The bill would be retroactive to March 13, the day in the 2020 school year that Gov. John Bel Edwards signed a proclamation that ended in-person instruction that semester.

“If you wouldn’t have taken the time and had the nerve to do this, who knows what would’ve happened?” Garofalo said.

“I’m trying to hold back tears because I’m so proud of my son,” Nyron Harrison said. “He doesn’t understand the seriousness of what’s going on right now, but he’s making history and I’m a very proud father right now.”

Victor Jones, a New Orleans civil rights attorney with an emphasis on children’s and disabilities rights, was paying close attention to Wednesday’s hearing.  He say if the bill named for Ka’Mauri passes, “it should have a deterring effect.” Even so, he remains concerned that what happened to Ka’Mauri will happen to others. “You don’t want to be the next school district on the news for suspending a kid over a BB gun,” Jones said. “But if this does happen to another child, there will at least be some due process protections to them.”

Jones said he’s noticed an alarming pattern in how schools have been disciplining students of color in virtual classes. “Across the nation so far, any time we’ve seen a student suspended or expelled from a virtual school, it’s been a male student of color,” Jones said. “These things aren’t happening in vacuums.”

Jones represented such a client who was expelled from a Jefferson Parish high school. Jones said his client was twirling knives the way he’d seen it done in a video game as he participated in virtual class that was recorded and sent to the school board. The attorney said the student didn’t make eye contact with anyone or say anything as he mimicked the game.

Jones said his client has a behavioral disability that causes him to space out and make irrational decisions. Jones said that federal law requires school boards to look at a student’s disability when making a disciplinary call, and his client was never extended that right.

“That alone was grounds for a federal violation,” Jones said. His client was recommended for expulsion, but Jones was able to spare him that fate.

If the “Ku’Mauri Harrison Act” does pass, it will be the first law addressing the discipline of students in virtual classrooms, and other states could soon follow Louisiana’s lead, Jones said.

“This would address some of the stories that we know about as attorneys, but didn’t get the media attention that Ku’Mauri got,” Jones said.

CORRECTION: A previous version of this story said the Jefferson Parish high school student mentioned was recommended for expulsion after twirling a knife-like video game accessory.  He was actually recorded twirling real knives. 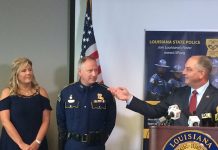 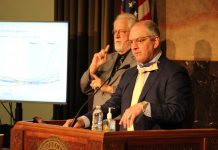 How Lake Charles will handle an election during COVID-19 and after...

State health department to stress the importance of flu shots in series of virtual...