Members of the legislative Police Training and De-escalation Task Force met with two New Orleans Police officers on Tuesday to discuss a training program that requires officers to intervene when witnessing a colleague’s misconduct. The program recently received backing from Georgetown University’s law school and is being considered for statewide adoption.

NOPD Deputy Chief Paul Noel and Detective Terry Bean shared details of the program, called EPIC (Ethical Policing Is Courageous), to the task force’s Subcommittee on Community Relations and Internal Operations. Noel and Bean developed the curriculum in 2014 and have required it for all officers since 2016.

EPIC teaches officers how to intervene when witnessing misconduct by one of their colleagues whether of equal or higher rank. The training incorporates a variety of tools but primarily relies on role-playing to teach officers how to speak to and how to physically stop a fellow officer who may be about to or already is violating a policy or law.

While the program is complemented by department policy that requires officers to intervene when seeing misconduct, such policy doesn’t always work unless an officer knows specifically how to verbally and physically respond, Noel said.

He said that early in his career during the 1990s, the advice he received was to simply walk away if he witnessed misconduct.

“You can’t just create policies and send these young kids out on the street,” Noel said. “You have to teach them how to use those policies.”

He said the training has done a lot to change the culture within the New Orleans Police Department.

NOPD has shared EPIC with other departments around the country, garnering attention from Georgetown University Law Center, which studied EPIC and adapted some of its features into a new version called Project ABLE (Active Bystandership for Law Enforcement). The university is sharing its resources with NOPD in the hopes of creating a new standard for law enforcement nationwide.

Members of the task force seemed receptive to the idea of adapting a similar program as part of statewide policy.

“Officers all across the state should have the duty to intervene,” Sen. Cleo Fields said. “I appreciate what you all have done. I do think it needs to be a statewide approach.”

The task force subcommittees have been meeting monthly and are scheduled to submit their recommendations to the rest of the task force by Nov. 7. The members will then debate, finalize and submit bill proposals to the legislature by Feb. 1, 2021. 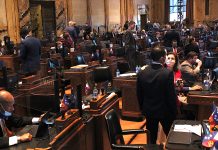