Without drastic intervention, Louisiana will cut unemployment benefits in 2021 to the lowest payouts of anywhere in the country — a maximum of $221 per week, Louisiana Workforce Commission Secretary Ave Dejoie said Friday. Louisiana businesses will also have to begin to pay more in taxes and surcharges to help keep those benefits flowing starting in January.

The cut in unemployment payouts and the additional business charges will be the result of the state’s unemployment trust fund being depleted to what is considered an unsustainable level. When the fund drops to a certain point, laws automatically require that employers start having to pay more money into unemployment and that the unemployed get paid less.

Louisiana claims it had one of the healthiest unemployment trust funds before the COVID-19 pandemic started — with a balance of $1.1 billion. But that funding had dropped to just $99 million by Wednesday, six months into a crisis that doesn’t appear to have much of an end in sight.

On Friday, the state panel that oversees Louisiana’s spending and budget — called the Revenue Estimating Conference — is expected to formally recognize that the state unemployment trust fund is running out of money. The state will have to borrow monday from the federal government to keep up with payments.

Dejoie expects Louisiana to start borrowing money from the federal government around Oct. 1 – in less than two weeks, she said. The borrowing has to take place in three month increments. Initially, the state expects to borrow around $200 million per month.

There is no interest on that loan for the rest of 2020, but that would change starting in January. The interest would probably be around 2 percent and start to accrue at the beginning of 2021. Repayments would have to start in September of 2021, she told lawmakers last week.

The news is not a surprise. Dejoie and other state officials have been warning that Louisiana would run out of unemployment funds for months.

Louisiana also isn’t the only one in this position. Dejoie said around 20 states are expected to have to start borrowing money from the federal government for unemployment by the time Louisiana taps those resources.

Nevertheless, Republican lawmakers appeared to be very alarmed last Friday when Dejoie provided them with an update. Several members of the legislative leadership asked her if there was a way to avoid the triggers that cause additional taxes and surcharges on businesses. They suggested that they might try to find an alternative source of funding to help replenish the unemployment trust fund.

Dejoie said if they could find an alternative source of funding by January — when the changes for both the unemployed and businesses kick in — then those triggers could probably be avoided.

But coming up with the amount of money needed to keep the trust fund solvent would be an enormous lift for the state — if the estimates of spending around $200 million per month on the program that Dejoie referenced were to hold true. To put that in perspective, Louisiana’s popular TOPS college scholarship program — which pays college tuition for over 50,000 students — costs a little over $252 million for an entire academic year.

Some states, Dejoie specifically mentioned Tennessee, are using their federal coronavirus relief funding to shore up their unemployment trust funds. And Louisiana Lawmakers are considering doing the same by shifting around some of the $1.8 billion the federal government has given the state for COVID-19 relief already.

Republicans are pushing to call a special session starting next Monday that could last about a month to take up the issue of the unemployment trust fund as well as other measures.

Specifically, some Republican lawmakers said they may look at taking some of the $275 million in federal funding that the Legislature set aside for private business grants — in what’s called the Main Street Program — and using it for unemployment relief instead. Republican Treasurer John Schroder said last week that only about $100 million of this funding had already been given out or was “in the pipeline” for local employers.

Another large chunk of Louisiana’s federal coronavirus cash — $500 million — went to local government entities for pandemic-related expenses. Some of that money may also be considered to help with the unemployment trust fund, though local governments have complained it isn’t nearly enough currently to cover their expenses.

New Orleans, in particular, says it needs more assistance to deal with its COVID-19 response. If lawmakers tried to siphon some of the local government support off to deal with unemployment issues, local officials are likely to get upset. These could include sheriffs and other law enforcement agencies, who have received a large portion of this cash.

Gov. John Bel Edwards has pushed going an entirely different route. He has recommended for months that Congress provide more relief to states on the unemployment front. Congress could provide funding and help waive the rules that lead to the reduction in unemployment benefits and the higher taxes on employers, he has said.

The governor, a Democrat, also believes Congress should provide another round of direct cash payments to people who are unemployed — as they did through the spring and summer.

The federal government supplemented state unemployment benefits from April to July with an additional $600 per week for hundreds of thousands of people in Louisiana. Then, many of those people continued to get another $300 per week in August and the first part of September. But that help ended on Sept. 5, and President Trump and Congress have not been able to come to an agreement on another round of those enhanced unemployment benefits yet.

There is a bit of a silver lining. After burning through about a billion dollars in cash in just six months, the state unemployment trust is likely to start drawing down fewer dollars than it has been shortly. The number of people receiving state unemployment benefits is about half of what it was at the height of the pandemic shutdown in April, Dejoie said.

Still, some Republican lawmakers have argued that the governor has exacerbated the unemployment problem by continuing to impose COVID-19 restrictions on businesses. Many employers are limited to operating at 75 percent capacity, for example, under a state emergency order controlled by Edwards. The governor said those restrictions need to be in place to keep COVID-19 in check and to prevent local hospitals from being overwhelmed.

The Republicans are also angry that the governor vetoed their suggestion to set $65 million aside temporarily for unexpected COVID-19 expenses. Legislators suggested this state funding could have been used to help replenish the unemployment trust fund.

Edwards vetoed the portion of the budget where the set aside was included — so that it could be used for state employee pay raises. Those pay raises went into effect July 1. 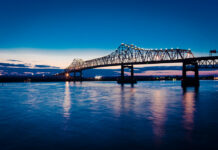 Louisiana’s unemployment benefits could drop from low to lowest

‘This is personal to me’: Scalise calls for more law and...