When 22-year-old Tyneesha Johnson evacuated her Lake Charles apartment when Hurricane Laura struck last month, she didn’t expect to not be able to return home.

The building’s still intact and so was all of her stuff inside her apartment, but on Sept. 3, without warning, Wilshire Apartments terminated the leases of Johnson and the residents in 190 other apartments “effective immediately.”

“Just imagine people that have kids in that apartment,” Johnson said. “There’s no telling how many families you’re actually kicking out. Everybody was just wondering, ‘What’s going on? I’m not understanding,’” Johnson said. So she texted her property manager, who responded saying to contact office management’s email for any further questions, and “if you don’t want to do that, this conversation is over. Good night.”

Wilshire Apartments told their residents they had until Monday Sept. 14 to schedule an appointment to retrieve their belongings, but only if they signed a lease termination agreement that would prohibit any tenants from taking legal action against Wilshire Apartments and keep the lease termination completely confidential. Residents were instructed not to “utilize any website or social media to negatively discuss its tenancy, Owner, or this agreement.”

Johnson said Latricia Thierry, the Wilshire Apartments property manager, even told their residents that they weren’t allowed to report to FEMA.

“To just take all of their options away from them and tell them that the only option that they have is to shut up and not tell nobody, that’s not okay,” Johnson said.

Bill Quigley, director of the Loyola Law Clinic and the Gillis Long Poverty Law Center, won a temporary restraining order against PC Wilshire LLC, Peak Living, LLC and Thierry Monday, the same day that the tenants he represents had been told they needed to retrieve their belongings.  Quigley had filed a class action lawsuit to stop what he called the property’s “illegal evictions of residents.”

Judge Robert L. Wyatt of the 14th Judicial District in Calcasieu Parish granted the temporary restraining order Monday. That order prohibits the company or its property managers from evicting residents or interfering in any way with their peaceful possession of their apartments.

Neither Thierry nor James Rather — the attorney representing the defendants PC Wilshire LLC, Peak Living, LLC and Thierry — could be reached for comment.

“These documents and the actions described in them clearly violate numerous laws, and so I ask you to immediately stop these illegal actions,” Quigley said in the cease and desist letter. “These actions by your corporation are particularly cruel when they target people who have been displaced through no fault of their own due to a hurricane and during a time when people are especially vulnerable from the effects of displacement due to the COVID-19 crisis.”

Thierry’s initial email to the residents said that their leases were terminated “due to the natural disaster of Hurricane Laura” and “if your intention is to return to the property to retrieve personal belongings this must be completed by September 14, 2020.”

However, some of the tenants are in hotels right now and would have nowhere to put their things if they retrieved them, Quigley said. Others who’ve gone back to look say that “some of the apartments are damaged, but some of them are fine. And they want to go back to their apartments.”

Quigley said what’s happening in Lake Charles happened in New Orleans after Hurricane Katrina. Landlords and corporations would kick residents out of their lease, he said, renovate the building and rent the property to other tenants at a higher price.

“This judge’s decision is important to send a message to all the renters in that hurricane-devastated area,” Quigley said. “So they know they have some rights and they can’t just be pushed out just because of a crisis.” 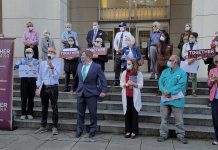 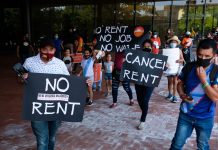 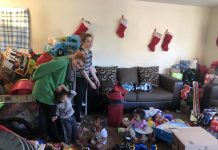