After months of speculation about what LSU football games would look like the season after the Tigers were crowned national champions and if even if there’d be a season at all, Gov. John Bel Edwards said at a Tuesday afternoon press conference that he would consider opening Tiger Stadium at a 25 percent capacity for this fall’s shortened SEC-only season.

“Whatever decision we make today… it’s always going to be subject to what’s on going in respect to COVID between now and then and whether it remains that,” Edwards said. “We want to be able to make an announcement that will hold true for Sept. 26.” LSU is scheduled to open its season that Saturday by hosting Mississippi State.

Tiger Stadium at 25 percent capacity would mean a total of about 25,600 fans, vendors and staff plus the members of the competing teams and their staff would be allowed in the stadium during game time.

According to Edwards, “(25 percent) is consistent with the vast majority of other SEC announcements.”  But Edwards said that Louisiana has had more cases per capita than any other state and that “we’ve already ridden the crest of two surges. I’m not anxious to do it a third time.”

The new coronavirus has hit the southeast region particularly hard, which means that most of the teams LSU will be also near the top of the country’s rankings of COVID-19 cases per capita.

Dozens of football programs across the country have announced they will not play in fall 2020. The Big Ten and Pac-12 have postponed their seasons while the Big 12, ACC and SEC — LSU’s conference — plan to continue to move forward. Southern and Grambling typically play to a huge crowd the Saturday after Thanksgiving but the Soutwestern Athletic Conference has pushed back its season to the spring. 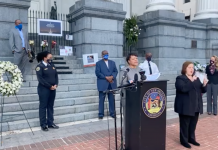