Sue Weishar, a policy and research fellow at the Jesuit Social Resarch Institute at Loyola University New Orleans, said it was important to hold the prayer service to commemorate and honor workers, particularly undocumented immigrants, who otherwise may not get the recognition Weishar said they deserve.

“The folks that did so much to rebuild our community are now today, not only forgotten, but in many cases persecuted,” Weishar said. “We just felt like we needed to lift up and recognize and remember our immigrant sisters and brothers.”

In 2006, nearly half of the rebuilding workforce of New Orleans was Latino, 54 percent of whom were undocumented, according to a population-based study by the University of California, Berkeley. And many of these undocumented workers were at-risk of exploitation.

“We are discriminated against. We are criminalized. We are excluded…” Leticia Casildo, co-executive director of Familias Unidas, said in Spanish during the prayer service.

“My message to the city of New Orleans and the state of Louisiana is that you look at us like human beings,” she said. “And love each other as humans so that all things good and bad that happen to all of us affect each of us no matter what.”

Cristi Rosales-Fajardo, executive director of El Pueblo NOLA, said that while Latinos made up nearly half of the reconstruction workforce, college students, most of them white, were held up as the  image of the people who were rebuilding New Orleans.

First Grace Pastor Shawn Anglim spoke about inclusion and acceptance for all. He said the Bible demands that immigrants be shown hospitality and respect. The Israelites, he said, were called to “‘remember you were once strangers in a foreign land.’ In other words, remember how you were treated. ‘Welcome the stranger as one of your own.’” 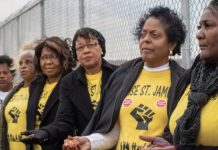 17 Calcasieu parish public schools will start their semester next week

Louisiana restaurants, casinos, bars get to sell alcohol for one more hour

If $600 checks from Washington disappear, unemployed workers will have to...

State board gives 5 companies $140 million off next year’s property...