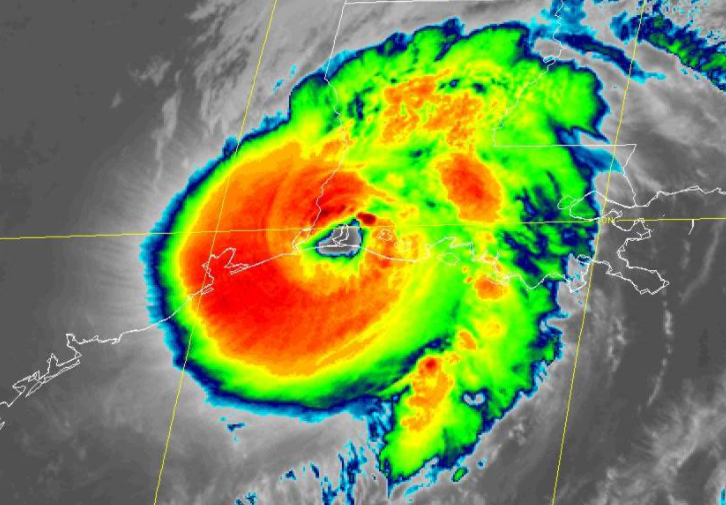 Hurricane Laura hit southwest Louisiana near Cameron about 1 a.m. Thursday morning as a Category 4 storm with sustained maximum winds of 150 miles per hour, the National Hurricane Center reports. According to records maintained by the National Oceanic and Atmospheric Administration, not since 1856 has a storm of that strength struck Louisiana.

Around 7 a.m. Thursday, Laura was classified as a Category 2 storm with sustained winds of 105 mph and was about 20 miles north of Fort Polk as it moved north at 15 mph.

There’s at least one known fatality from Hurricane Laura.  A spokesperson for Gov. Edwards tweeted that the governor had been informed that a 14-year-old girl in Louisiana was killed when a tree fell on her home.  “We do expect that there could be more fatalities,” wrote Christina Stephens, the governor’s deputy chief of staff for communications and special projects.

On Twitter, Edwards warned Louisianians that the weather emergency isn’t over. “As we wake up today,” he wrote, “everyone must remember that the threat Laura poses to Louisiana is ongoing. Stay home, continue to heed the warnings and instructions of local officials and monitor your local news to stay informed.”

As we wake up today, everyone must remember that the threat #Laura poses to Louisiana is ongoing. Stay home, continue to heed the warnings and instructions of local officials and monitor your local news to stay informed. #lagov #Laura #HurricaneLaura #lawx

Hurricane Laura entered the Gulf of Mexico Tuesday as a Category 1 storm and quickly strengthened into a storm of devastating force. On Wednesday Louisianians were told to prepare for a Category 4 storm with winds up to 145 mph and for a storm surge that forecasters called “unsurvivable.”

“I think the damage from this will be unfortunately devastating,” NWS Meteorologist Ben Schott said Wednesday. “To think that there will be a wall of water 2 stories high coming ashore is very difficult to imagine.”

“People in South Louisiana need to understand that the wind threat here is serious,” Schott said.

Early reports from Thursday morning suggested that the winds were even stronger than forecast, but the wall of water slamming into the coast was not as high.

In the days leading up to Laura’s landfall, Gov. John Bel Edwards repeatedly compared Laura to Hurricane Rita, a devastating storm that hit Cameron Parish in September 2005. Rita was a Category 3, Laura a 4.

The “Last Island” Hurricane of 1856, which had winds as strong as Laura, killed more than 200 people on the barrier island south of Dulac known as Isle Dernière.  That hurricane split the island in half, forcing Louisianians to switch to the plural: Isles Dernières.

John Bel Edwards plans to get the COVID-19 vaccine — but...