Louisiana surpassed 4,000 deaths attributed to COVID-19, though the actual death toll is assumed to be higher since some people suspected to have the virus died without being tested for it.

The state recorded 50 new deaths Thursday, bringing the official count to 4,028, according to the Louisiana Department of Health. Those newly reported deaths could have occurred days or even weeks ago, since there is a lag in the statewide data.

The number of deaths per day had reached a daily high in Louisiana of over 70 in early April, but then started to fall, presumably as a result of the state’s economic and social shutdown. They began to climb again in late June, a few weeks after the state entered its second phase of reopening.

It’s difficult to tell whether the daily death toll continues to increase since there is a delay in collecting death data at the state level. But in late July, daily death tolls were in the high 20s to low 40s – not nearly as high as they were for most of April. Health experts have touted advances made in coronavirus treatment over the last few months, which they said should result in a lower mortality.

People who are older have been killed more often by COVID-19. The median age for a person in Louisiana who has died from the virus is 77 years old, according to the Department of Health.

The Black community has also been disproportionately impacted. They make up 49 percent of the people who have died of COVID-19 in the state, despite being only a third of the overall population.

The percentage of Black people dying from COVID-19 has decreased as the pandemic has continued. In early April, when Louisiana first started reporting death data broken down by race, roughly 70 percent of those dying from the virus were black.

People who have died of coronavirus have been likely to have certain health conditions. Nearly 60 percent of them had hypertension, 35 percent had diabetes and 21 percent had cardiac disease, according to the Department of Health.

Louisiana ranks sixth in the country when it comes to COVID-19 deaths per capita, according to The New York Times. Every state with a higher death rate — New Jersey, New York, Massachusetts, Connecticut and Rhode Island — is located in the Northeast.

But Louisiana is the only one of those states that has one of the highest coronavirus death rates in the country now, according to The New York Times. Mississippi, Arizona, Florida and South Carolina — all states that haven’t previously seen spikes in COVID-19 deaths — are also losing more people per capita to coronavirus currently. 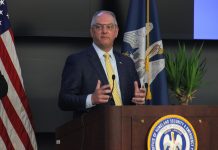 No direct aid for states in GOP’s emergency relief plan