As protesters in cities from Richmond, Virginia, to San Francisco toppled statues last month, urban planner Amy Stelly allowed herself to hope that New Orleans might soon fell its own worst “racist monument.”

For much of her life, Stelly, who is Black, has lived in the shadow of the Claiborne expressway, an elevated freeway built through the Tremé, Tulane/Gravier and 7th Ward neighborhoods. She has fought to tear down the highway and restore this commercial corridor at the heart of Black New Orleans, but faced skepticism, indifference and inertia.

Now, as the nation reckons with other racist aspects of its past — with protests, in several prominent instances, on ’60s-era freeways much like the Claiborne Expressway — Shelly and other advocates around the country are intensifying their calls for city and state governments to remove the highways that destroyed Black neighborhoods.

Such teardown projects, once seen as fanciful, have gained momentum as the country’s highway infrastructure ages and early adopters show off their success. Five U.S. cities have either capped freeways or converted them to street-grade boulevards in the past three years, and similar plans are under review in states including Massachusetts, California and Texas.

Race usually has been a subtext in these conversations. But in the current climate, advocates say it’s time for cities to confront and resolve the racist planning decisions their predecessors made 60 years ago.

“It gives us more ammunition,” Stelly said. “Because when you look at how these things have developed in their totality, they’re absolutely racist.”

Constructed largely in the late 1950s and ’60s, the highway system was, at its outset, perhaps the greatest testament to America’s sprawling postwar ambitions. During the initial buildout, the federal government covered 90% of construction costs — which encouraged state agencies to build big.

By 1980, there were more than 40,000 miles of road in the interstate system. Highway engineers have since added more than 5,000 miles aimed at speeding up traffic and easing congestion, especially for suburban commuters.

Dismissed as ‘slums,’ Black neighborhoods were targeted for demolition

Those neighborhoods, as the late urban historian Raymond Mohl documented, were frequently Black. In many cases, city and state planners purposely built through Black neighborhoods to clear so-called slums and blighted areas.

“The highway system, in its planning and implementation, drove a physical wedge through many parts of America,” said former U.S. Transportation Secretary Anthony Foxx, a critic of the early highway buildup, in an email.

In New Orleans, where Stelly was a child in the 1960s, state highway engineers cleared a swath of land along North Claiborne Avenue to accommodate the unfurling Interstate 10. Black residents fought plans to build a six-lane elevated expressway over what was once an oak-lined commercial thoroughfare.

Before the completion of the expressway, Stelly said, residents would walk to Claiborne Avenue for everything from groceries and household errands to Mardi Gras parades and funerals.

But while officials nixed plans for a similar expressway through the French Quarter, which preservationists opposed, they moved forward with the Claiborne expressway, destroying dozens of businesses and homes.

Against this backdrop, and amid national conversations on race and justice, some advocates have intensified their calls for freeway removal. Such projects have gained momentum in recent years, as the country’s highway infrastructure requires ever more expansive, and expensive, repairs.

According to the Congress for the New Urbanism, a national nonprofit planning group, 14 North American cities have demolished or downgraded their freeways with the help of state and federal grants, and another four have formally started such projects.

Those cities include Milwaukee, which demolished a downtown freeway spur in the early 2000s, and Rochester, New York, whose success repurposing the former site of a sunken highway is often cited by teardown proponents. Since removing the so-called Inner Loop in 2017, the city has rebuilt the street grid and parceled out new spaces for affordable housing, retail stores and a local museum expansion.

“The effort is to try to create a slightly more equitable Rochester,” said Arian Horbovetz, a local transportation advocate and blogger. “In removing these highways, we’re facing aspects of our racist past. That’s the hard part.”

But advocates hope more cities will do more of that hard work now, said Arzu, the planning consultant. In Syracuse, New York, where officials already had announced plans to remove part of I-81, a June 23 op-ed in the local paper urged locals to acknowledge the highway’s “racist foundations.”

In New Orleans, meanwhile — where local officials have repeatedly declined to pursue teardown plans — Stelly recently plastered slogans like “this monument to racism is a crime” on I-10’s concrete columns.

“Race is always embedded in these discussions,” Stelly said. “And I think people are more inclined now to have that conversation.”

But not everyone is on board just yet. Despite calls for change, highway engineers in places such as Portland and Shreveport as well as Birmingham, Alabama, still are widening existing freeways or planning new ones.

State transportation departments generally are most concerned with moving traffic, said Eric Sundquist, the director of the State Smart Transportation Initiative, whose membership includes officials from 19 state transit agencies. And when it comes to traffic, freeways “do a good, if not great, job of moving large numbers of people,” the economist Randal O’Toole wrote in a July blog post lampooning freeway removal.

Some Black residents also have worried that removing freeways will open their neighborhoods up to new development and gentrification. Ben Crowther, who oversees the Congress for the New Urbanism’s freeway removal work, said it was critical that cities use policy protections, such as property tax abatements and community land banks, to protect existing residents and avoid repeating old mistakes.

There are signs, at least, that city officials and other planners are learning. At the Congress for the New Urbanism’s most recent conference, which took place online in June, half a dozen panels explicitly addressed what Stelly calls the “effects of racist planning,” from gentrification near transit stops to health disparities in Black neighborhoods. In a profession that is overwhelmingly white and male, that already represents a profound shift.

“There is a reckoning taking place,” Arzu said. “Anyone who digs deep enough realizes now that urban planning contained a degree of racism in the past.”

In the coming months, Stelly plans to work with two university students to boost her campaign’s communications and social media presence. She already is partnering with a nearby school of public health to both study the effects of living in the freeway’s shadow and teach students to understand up close the social determinants of health.

By the end of the year, she hopes to complete new renderings that imagine what the neighborhood could look like if the I-10 came down: a restored, lively, mixed-use boulevard, much like the Claiborne Avenue of her childhood. 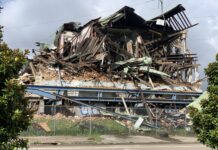 Billy Nungesser says transgender restrictions will have a ‘negative impact’ on...