Protesters gather outside the Governor’s Mansion in Baton Rouge during a 2020 rally against Louisiana’s stay-at-home order early in the COVID-19 pandemic and economic shutdown. (Photo by Chris Graythen/Getty Images)

David Jackson, a 45-year-old Black man who lives in New Orleans, is the Facebook friend who had the most shocking response to a pair of questions I recently posted: How many people do you know who’ve died of COVID-19, and how many do you know who’ve been infected but haven’t died?  Jackson, who works as a director of marketing and serves as the director of his church’s communications ministry, said he knows 22 people who’ve died and 46 more who’ve been infected.

Jackson shocked me even further during a conversation Sunday when he said that his personal tally of COVID-19 fatalities is not the highest he knows about. A Black woman in New Orleans he said, counts 31 people lost.

With the exception of a few people in Plaquemines Parish, everybody Jackson knows who died of COVID-19 was in New Orleans. The one that was the most distressing, he said, was the veteran he joined for lunch every day. “He and I were the same age,” Jackson said. That friend, he said, survived two tours in Iraq and one in Afghanistan.  He was also deployed to Somalia and Panama. “And he died on a ventilator at the V.A. I’m just numb. I’m in shock right now.”

Of the 22 people Jackson knows who’ve died of COVID-19, every one of them was Black.

That’s not surprising.  Gov. John Bel Edwards said April 6 that Black people, despite being a  third of the state’s population, accounted for 70 percent of the state’s COVID-19 fatalities. Black people’s share of deaths has dropped since, but it remains a shamefully high 52 percent.

When researchers at The Data Center subtracted the people who died in New Orleans nursing homes, they found that Black people have been 88 percent of the city’s COVID-19 fatalities and that Black people between 60-69 have died of COVID-19 at a rate 12 times higher than their White counterparts.

But those figures don’t say anything about White people’s ability to contract COVID-19 or die from it.

The novel coronavirus originated in China, and while there have been some people who emphasize Chinese origins when they want to exonerate lackadaisical American officials, they don’t seem to be aware of what bringing up China says about COVID-19 here.  Namely this: If the virus made it all the way from China to the U.S. mainland, then surely it could and would make it from New Orleans to other parts of the state.

But despite the virus’ worldwide killing spree, it appears that residents across much of Louisiana developed the belief that what was happening to New Orleanians couldn’t happen to them. That disbelief and ignorance — driven by a willingness to dismiss Black pain as unimportant and a foolish commitment to distrust anything the press, scientists or Democrats say — has made it that much easier for the virus to spread into Whiter and less urban parts of the state.

As reporter Julie O’Donoghue reported Friday, Louisiana is the only state that had a frightening spike of COVID-19 cases in the spring and is having a second frightening spike of COVID-19 now.  At a Saturday press conference, Dr. Joe Kanter, the Assistant State Health Officer for the Louisiana Department of Health, said, “The first time around it was focused mostly in the Greater New Orleans area. … It’s no longer a New Orleans issue. It’s a Louisiana problem.”

That Saturday press conference was where Edwards announced his orders shutting down bars and requiring Louisianians to wear face masks.  The governor’s order applies to every parish that, in a two-week span, has had at least 100 positive COVID-19 tests per 100,000 residents.

According to a Monday report from the Livingston Parish News, “In the most recent two-week period, Livingston Parish’s rate of incidence was 408.41 per 100,000 — higher than Orleans, Jefferson, East Baton Rouge, St. Tammany, and Caddo parishes, which have all been the most notable hotspots for the virus in Louisiana since March.”  Even so, Livingston Parish President Layton Ricks — representing a parish that’s 90 percent White and where 85 percent of residents voted for Trump — volunteered Monday that parish officials won’t be enforcing the governor’s order. It’s worth noting that the governor hasn’t even asked local law enforcement to be enforcers.

Jackson said when he drove from New Orleans to Calcasieu Parish to retrieve his son from McNeese State, he saw people crowded in restaurants without masks and realized, “These people don’t believe this is true.” He told his son, “Let’s get out of here right now.” 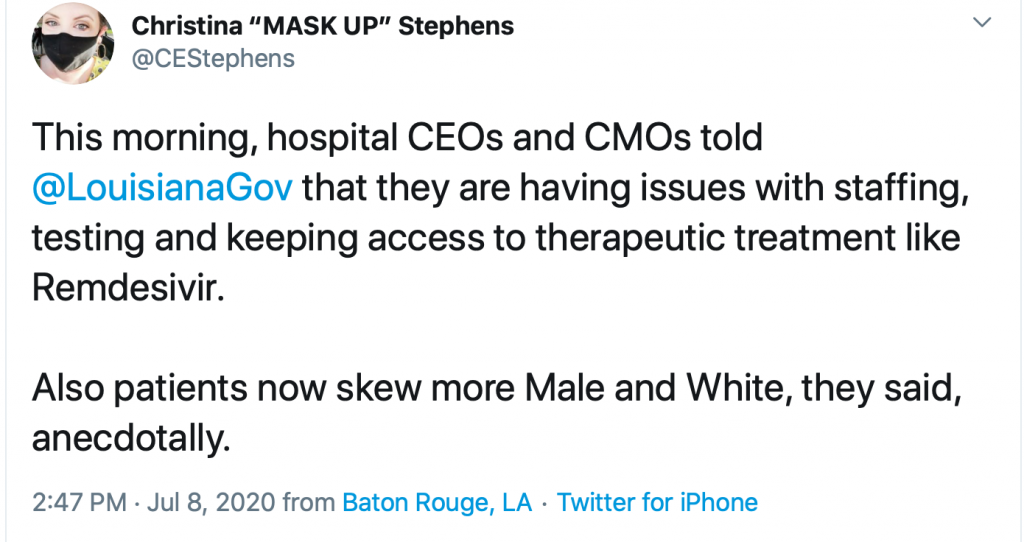 At a July 9 press conference in Lake Charles, Dr. Lacey Cavanaugh, the Office of Public Health’s regional director for the area that includes Calcasieu and Allen, Beauregard, Cameron and Jefferson Davis parishes, said, “In comparison to our previous peak, we have twice as many hospitalizations across this region.”  The day before that, a spokeswoman for the governor tweeted that hospital administrators told the governor that “patients now skew more Male and White.”

In the Richard Pryor quote above, the comedian is describing the way many White people shrugged when they believed drug abuse was endemic to black neighborhoods but screamed, “Oh, my god it’s an epidemic!” when they encountered white people who were strung out. It’s been almost 40 years since Pryor expressed the hope that black people’s suffering would merit genuine concern from White people and that they wouldn’t wait until the suffering hit them to take it seriously. In this case, the expectation wasn’t that people outside New Orleans would help those there. The only expectation was that they’d take the disease seriously enough to preserve their own health and protect their own lives.

But nothing has changed. Once again, a tragedy unfolding in Black areas was wrongly characterized as a Black thing, and once again, because of that mischaracterization, that tragedy is destroying even more lives.

Jarvis DeBerry, former editor of the Louisiana Illuminator, spent 22 years at The Times-Picayune (and later NOLA.com) as a crime and courts reporter, an editorial writer, columnist and deputy opinions editor. He was on the team of Times-Picayune journalists awarded the Pulitzer Prize for Public Service after that team’s coverage of Hurricane Katrina and the deadly flood that followed. In addition to the shared Pulitzer, DeBerry has won awards from the Louisiana Bar Association for best trial coverage and awards from the New Orleans Press Club, the Louisiana/ Mississippi Associated Press and the National Association of Black Journalists for his columns. A collection of his Times-Picayune columns, “I Feel to Believe” was published by the University of New Orleans Press in September 2020.